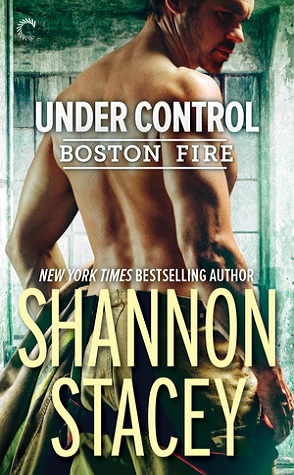 Derek Gilman is a man who loves his family.  His marriage didn’t work out, but they stayed good friends.  He has two children and they mean the world to him.  He wasn’t expecting to meet anyone that would catch his eye, but when he gets stuck in an elevator with Olivia McGovern she pushes all of his buttons.

Olivia has no time in her life for dating.  She has a plan and a man plays no part of that.  Unfortunately for her plans, Derek gets under her skin and she’s soon having to make adjustments.  But can she make enough adjustments to her life to include Derek and his two kids and still live her life the way she wants to?

This was a cute story.  I liked Derek a lot.  I liked how he was with his kids and also the fact that he was such good friends with his ex-wife – kind of like he was before they got married.  With Olivia it took me a while to warm up to her because she was so Type A and had every minute of her day/life planned.  She needed some warmth and spontaneity in her life…and Derek provided that.

Olivia and Derek fall in love pretty quickly but neither is willing to compromise their lives for the other.  They live 40 minutes away from each other.  She makes a lot of money, he makes a fair amount but nothing spectacular.  Her job is in downtown Boston, his isn’t.  Money and location ended up being an issue between them and that annoyed me for some reason because he wouldn’t compromise and his pride was getting in the way.  I mean, I could tell how much they loved each other, and their relationship was pretty good, but the story lacked a spark.  Maybe it was because the book was so centered on them and lacked outside issues?  IDK.

We got some time with the other guys in the firehouse and characters from past books.  We also got, woven into this story, a bit about Grant and his girlfriend Wren.  I’m thinking the next book will be their book and it looks like it will be a good one.