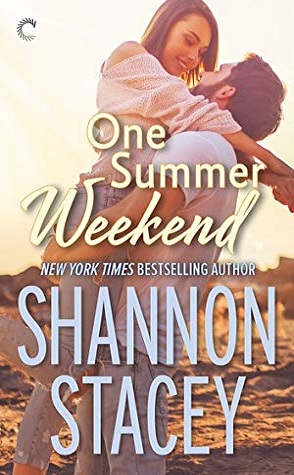 Best friends. A fake relationship. And only one bed.

Noah Stafford loves his life—his happy, single life. So what if he made up a fake girlfriend to stop his boss’s matchmaking? He kept things close to the truth—Carly really does have long, sexy legs and a killer sense of humor. She just happens to be his best friend. His wicked awesome and completely platonic best friend.

But now his boss is having a destination wedding, and Noah is expected to attend…with Carly, his girlfriend.

Carly Randall has no interest in living out a rom-com plot. But Noah is her best friend, so she agrees to help. Still, once they arrive on Cape Cod, she can’t explain the sudden butterflies she feels when he looks at her that way. Or why she doesn’t mind when Noah’s hands stray a little south of her back.

Except not really, not at all, and once their sexy faux-cation is over, Noah and Carly return to a reality where everything’s changed. Going for it would mean risking their friendship…but forgetting how good they were together just isn’t an option.

One summer weekend is the story of Carly and Noah who are best friends. Noah has been working at an architectural firm and very much enjoys his job. Unfortunately his boss, Tom, keeps trying to fix him up with his soon to be sister-in-law. Noah is sure that the soon to be sister-in-law is pretty and nice, but he’s positive that if he goes out with her he will have one foot down the aisle. That’s not something he wants. What did he do? He lied to his boss. He ended up telling Tom that he already had a girlfriend and I know you’ll be shocked when you hear that he said it was Carly.

Carly has no idea that Noah has been lying to his boss and saying that she’s his girlfriend. Noah finally comes clean to her because it’s Tom’s wedding weekend and his boss expects Noah’s girlfriend to be in attendance. Of course he does. Carly says no at first, but then she realizes that this means a lot to Noah and so she agrees to go as his girlfriend. When they get to Cape Cod they are of course in the same room, in the same bed, and with playing girlfriend/boyfriend they end up kissing. One thing leads to another and they’re having sex. Neither one of them is prepared for the emotions that this invokes in them. Can they remain best friends when each of them aren’t sure how they now feel about the other person?

This was a pretty cute story, I have to admit. I absolutely love Carly and Noah’s relationship. They were such good friends and knew each other so well and their love for each other came through. They had been friends for so long that they truly did love each other they just weren’t in love with each other. Or so they thought. 🙂

Stacey has a great way of bringing friends together and I think this friends to lovers story was a good one. I very much enjoyed reading it, and would definitely recommend it if you’re just looking for a short fun read.

One response to “Guest Review: One Summer Weekend by Shannon Stacey”