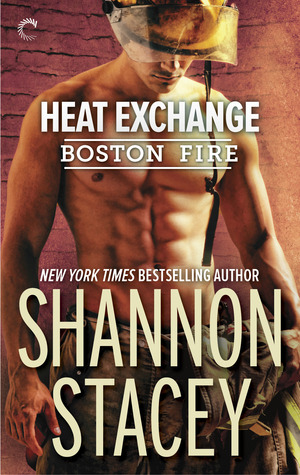 Lydia Kincaid's shipping back to Boston, but she's not happy about it. She left to get away from the firefighting community—her father was a firefighter, her brother's a firefighter and, more important, her ex is a firefighter. But family is number one, and her father needs her help running the pub he bought when he retired. Soon, Lydia finds it hard to resist the familiar comfort and routine, and even harder to resist her brother's handsome friend Aidan.

Aidan Hunt is a firefighter because of the Kincaid family. He's had the hots for Lydia for years, but if ever a woman was off-limits to him, it's her. Aside from being his mentor's daughter, she's his best friend's sister. The ex-wife of a fellow firefighter. But his plan to play it cool until she leaves town again fails, and soon he and Lydia have crossed a line they can't uncross.

As Aidan and Lydia's flirtation turns into something more serious, Lydia knows she should be planning her escape. Being a firefighter's wife was the hardest thing she's ever done, and she doesn't know if she has the strength to do it again. Aidan can't imagine walking away from Boston Fire—even for Lydia. The job and the brotherhood are his life; but if he wants Lydia in it, he'll have to decide who's first in his heart.

I haven’t read too many books by Shannon Stacey but the couple that I have read, were solid reads. I was mighty interested in reading this series because I love firefighters and this series featured three of them. Count me in!

So Heat Exchange is the first book in the Boston Fire series and it follows Lydia Kincaid and Aidan Hunt as they fall in love. Lydia Kincaid is no stranger to the Firefighters wives club. She grew up with a firefighter father then later on, a firefighter brother and then she married and divorced a firefighter. Right about now? She’s all firefighter’d out. After divorcing her cheating, no good ex-husband, she moves away from Boston and starts fresh in a new town, with new neighbors and a new job. Gone are the days of her working in her father’s bar but when her sister needs her to fill in for her at the bar, Lydia finds herself back home, tending bar at her father’s pub and sliding right back into her old life.

The only thing different this time around is Aidan Hunt, her brother’s best friend and another freaking firefighter. Aidan is all grown up and is looking good…really good and Lydia notices. Aidan notices that Lydia notices and like a moth to a flame, burned by the fire, their love is blind and everyone can see their desire cause that’s the way love goes. LOL.

Aidan has always had a crush on Lydia but hasn’t ever tried going down that road because a) she wasn’t interested in him and 2) it goes against the firefighter brotherhood and best friend code. You don’t bang your brother’s sister, mother, ex, etc…and he fully intended to stay away from Lydia but then she looked at him. Like, really looked at him and he was gone. All intentions he had of staying away went up in smoke.

Lydia was done with firefighters. She was done with the all of the worrying so she has no idea what she’s doing with Aidan. She’s not planning on sticking around and the more time she spends with Aidan, the harder it’s getting for her to go back home.

Because Lydia is the daughter of the firefighter that Aidan thinks of as a father and the sister of his best friend, instead of coming clean about their relationship from the jump, Aidan and Lydia start a secret romance like they were in freaking high school and to be honest, I wasn’t a fan of that. At all.

Their whole secret romance left me scratching my head because that is the kind of shit you do in high school because your parents still have a say in what you can do. It would have been one thing if they were just being discreet but they lied and kept up lies, all in the name of having sex with each other. I thought Aidan’s lies to Scott were dumb and I thought Scott’s reaction to Aidan and Lydia’s relationship was ridiculous too.

I’m a total West Coast girl. Born and raised in Southern California so I know nothing about cold and the snow and don’t really care to. I love my California sunshine and I love the laid back lifestyle that California is known for. While I was reading this book, my California laid back lifestyle didn’t really connect with the Boston intensity that these characters showed. I did enjoy the family mentality that these guys had but all of the other crap with the secret romance, the don’t tell Scott what we’re doing, the lies…didn’t work for me.

I did enjoy the secondary romance between Ashley and Dan. I liked seeing their love for each other being tested and the show down between these two was great. Oh man, I loved Dan and understood where Ashley was coming from and thought that Stacey did a great job of writing their romance. I just wish that they had gotten a full length novel.

So while I had issues with the main romance, there was still enough of everything else for me to enjoy. I’m looking forward to reading the next book because I’m mighty curious about Rick Giulotti and hell, I’m even planning on reading Scott’s book. I’m curious to see who he ends up with.