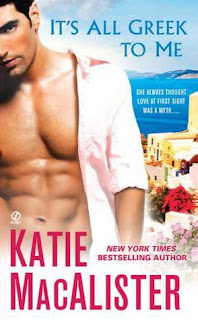 Mary’s review of IT’S ALL GREEK TO ME by Katie MacAlister.

Billionaire Greek playboy Iakovos Papaioannou knew his sister hired her favorite band to perform at her birthday party. He’s just not sure how their six-foot tall, wild-haired, tempestuous manager has already ended up in his bed-and in his heart. Eglantine “Harry” Knight is so not his type. She’s as infuriating as she is intriguing, and she’s can’t keep her hands off of him. But she just may be the woman who knocks him off the world’s most eligible bachelor list for good…

This book. Oh, dear. There are some things in it that are classic Katie and the reason I usually love her books. Yet, there are things that made me cock my head like my dogs when they’re confused as I wondered what the heck she was thinking.

Classic Katie comes out in the form of fabulous banter between the main characters. Harry’s a typical MacAlister creation—larger than life, unconventional, and generally thought to be not super-pretty by all men except for the hero, who immediately throws himself at her feet and worships her extravagant beauty. Okay, not really. Iakovos, formerly the number three most eligible bachelor but now down to position number five, is rich and handsome and has never settled down with one woman because they’re all *yawn* the same. But they meet and Boom! instant attraction. Except all they do is fight (the best part, in my opinion). I love this bit – Katie MacAlister’s got a breezy, fun writing style that keeps me reading.

Unfortunately, they get together and are on their way to happily ever after way too quickly, leaving the rest of the plot to skate along on razor-thin conflicts (the possibility the kid isn’t his, her not feeling like she fits into his life, a bitchy ex-girlfriend…meh) in order to keep us reading.

But let’s get to the WTF-ery, shall we? When we first meet Harry, she’s being dragged up to a bedroom where one of her young charges, Cyn, has been attacked. After much yelling, it comes out that Cyn misinterpreted the signals drunk Theo was giving off and threw herself at him, waiting for him up in his bed. He did kiss her (leaving behind some serious razor burn all over her chest) but then tried to kick her out of his room. Not at all happy with this, she cries foul and has a fit, claiming he hurt her.

Is this supposed to be funny? Because it’s not. It’s not funny that Cyn threw herself at Theo then turned around to claim he attacked her. It’s just not. Rape/sexual attacks are very serious and shouldn’t be used as fodder for humor. It’s definitely not a “meet cute” when Harry goes ballistic, hits Theo, and Iakovos has to break it up, both of them reacting with instant lust for each other despite the seriousness of the situation. Maybe I’m overreacting but the whole situation is a huge WTF for me.

Then there’s Theo, Iakovos’s brother. Turns out he’s an alcoholic with rage issues. My issue with this is that his very serious issues seem to be thrown in to stir things up, to create conflict because there isn’t much else going on conflict-wise in this story.

All in all, while I loved the banter, Harry and even the all-too-perfect Iakovos, the rest of the story leaves much to be desired. 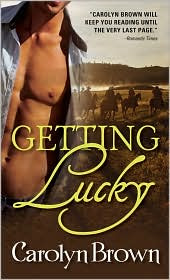