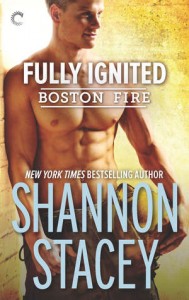 When Jamie Rutherford takes a temporary assignment as lieutenant of Boston Fire’s Engine 59, she doesn’t anticipate any problems. She’s been in the fire service for a long time and, even though she’s fairly new to Boston, she knows how to make any firehouse her home. What she’s not prepared for is her reaction to firefighter Scott Kincaid.

Scott is looking for a wife. It’s been a fun ride as a single guy, but he’s tired of being the third wheel, and nearly losing his brother-in-law finally made him realize just how much he wants a family of his own. When the new guy at the firehouse turns out to be a capable, confident and very attractive woman, his plan is completely derailed.

Hooking up with a fellow firefighter has never been part of Jamie’s plan, but she’s tempted by Scott—even though getting involved with him could tarnish the reputation she’s worked so hard for. And Scott can’t stop thinking about Jamie, despite the fact that she’s his superior and not sticking around. Chemistry can crush the best-laid plans, though, and while Jamie and Scott might not be each other’s future…there’s no resisting the right now.

Jamie is a woman in a man’s world. There are so few female firefighters and when she heads to Engine 59 in Boston to cover for the Lieutenant who is hurt she’s not sure what to expect. What she finds is a well-run station with men who are understanding of her personal space and respectful of her and her position. What she doesn’t expect is the incredible attraction she has to one of Engine 59’s men. She knows that she should stop thinking about Scott but she finds she just can’t.

Scott knows it’s a bad idea for him and Jamie to get involved but they go about it with the thought that it will only be for fun and end when she moves on to her next assignment. Neither of them plan on having feelings for the other but it’s their connection to each other is truly undeniable. There’s problems, however, in that neither wants to speak of a future first and Scott has issues with the danger Jamie is in on a daily basis. He knows she does her job well and is incredibly safe but for a man who lost his mother when he was young he knows that any kids he has he doesn’t want growing up without a mother. How can he go into a relationship with Jamie knowing that her chances of getting hurt are huge? It’s an issue and one they might not be able to a solution for.

I really like the Boston Fire series. The guys in the station are awesome and crazy and funny and, and, and… I could go on but suffice it to say they are guys I like reading about. When it came to Scott I loved reading his story. He was so set on the kind of woman he wanted based on his own life and growing up without a mother and that idea was just turned completely on its head after meeting Jamie. He was so into her and I loved how he treated her and generally their whole relationship.

Jamie was incredible as well. A strong woman who knew what she wanted in life and wasn’t willing to compromise. I loved how tough and strong she was but that she wasn’t a ball-buster. She was obviously the minority in the station but she did her job and did it well. Her relationship with Scott was sweet and I admired her for sticking to her guns with him despite it breaking her heart to do so. I was really happy when they finally got their HEA.

Like I said I really like this series so far and hope there’s more in store for us in the future.

One response to “Guest Review: Fully Ignited by Shannon Stacey”