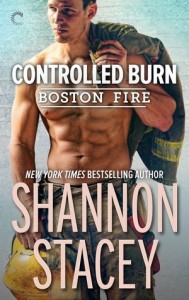 Jessica is a financial planner and is VP in her father’s financial planning/investment firm. When her father got a call from a doctor telling him that his father had fallen, Jessica picked up the call. As her father, David, hasn’t talked to his parents in 40 years Jessica took the task of dealing with her grandparents on her own. Of course her grandparents had no idea that she existed but they were thrilled to meet her.

Jessica is distrustful of Rick who rents the 3rd floor of the house that her grandparents own. He is trying to look out for them and he certainly doesn’t trust Jessica as he thinks she’s just trying to do what’s best for herself, not her grandparents. Despite that the two can’t seem to fight the attraction that they each feel. They think they can resist it but soon discover it’s much more fun to NOT resist. Of course they both know that Jessica will be going home eventually and they’re not sure what will happen when that time comes around.

This was a very sweet contemporary romance. It did have a few issues in it that bothered me but for the most part it was quite cute.

Rick was a hot and hunky firefighter with a big heart and I couldn’t seem to resist his charm. He really was a nice guy and though he hadn’t met “the one” and dated a lot of women he still had conversations with his buddy about getting married one day. It was heart warming and I really couldn’t help liking the guy.

Jessica took bit longer for me to like. She was quite sweet originally but then her financial advisor would come crawling out of her skin and it would make me dislike her. In fact that part of her life almost ended the relationship between her and Rick and the words she said truly rubbed me the wrong way. They didn’t work for Rick either! I got her side of things but I think it was due to the way she was raised and I tried to forgive her.

The ending was a big issue for me as it left waaaay too much up in the air regarding their relationship and Jess’s grandparents and their house. What the hell happened?? I seriously got to the end of the book and kept trying to turn the page in Adobe Digital Editions. After the 3rd time I realized that was it and certainly wasn’t happy. I wanted more! An epilogue would have been a BIG bonus in this book to wrap things up.

Overall a good book despite my issues with it. It was fun and sexy, had good family vibes and lots of good food involved – that’s a great blend in my book.