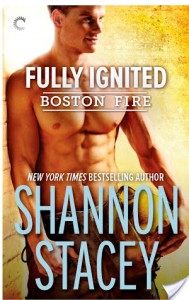 When Jamie Rutherford takes a temporary assignment as lieutenant of Boston Fire's Engine 59, she doesn't anticipate any problems. She's been in the fire service for a long time and, even though she's fairly new to Boston, she knows how to make any firehouse her home. What she's not prepared for is her reaction to firefighter Scott Kincaid.

Scott is looking for a wife. It's been a fun ride as a single guy, but he's tired of being the third wheel, and nearly losing his brother-in-law finally made him realize just how much he wants a family of his own. When the new guy at the firehouse turns out to be a capable, confident and very attractive woman, his plan is completely derailed.

Hooking up with a fellow firefighter has never been part of Jamie's plan, but she's tempted by Scott—even though getting involved with him could tarnish the reputation she's worked so hard for. And Scott can't stop thinking about Jamie, despite the fact that she's his superior and not sticking around. Chemistry can crush the best-laid plans, though, and while Jamie and Scott might not be each other's future…there's no resisting the right now.

When we first meet Scotty Kincaid, he was a hot head that went about his business fists flying. Two books later and he’s working on his anger issues and making changes in his life because he’s decided he wants to settle down and not bang a new woman every week. He wants something more stable, he wants to start a family soon and he can’t do any of that living the way that he’s been living.

He wasn’t expecting the fierce attraction that came on when Jamie Rutherford started work at his fire house.

Jamie Rutherford is on a temporary gig in Boston, filling in for an injured firefighting officer and it’s her job to run herd over Danny Walsh’s team and make sure everything is running smoothly until he gets back. Everything is going well until she meets Scotty Kincaid and the strangest thing happens. For the first time in her career, she’s attracted to someone she works with. So this should be interesting, right?

Scott was everything I hoped he would be by the time we got to his book. On top of being smokin’ hot, he was a family man and I really dug that. I loved the way that he was with his sisters and his brothers in law. He had a good relationship with everyone in his family and I adored the dynamic in their family. They were a close family that joked around with each other, made each other mad but loved the hell out of each other at the end of the day. Seeing Jamie accepted and pulled into their family was sweet too.

Jamie was a great heroine, probably my favorite of the bunch. She was independent, strong and she had a good head on her shoulders. I liked that even though she was the only woman working in an entire fire house of men, she didn’t mother hen anyone around and she wasn’t portrayed as stubborn and didn’t have that my way or the high way attitude. She fit right in at the fire house and I liked seeing her grow closer and closer with each guy in the house…even Danny.

There were times that I wanted to bean Scott in the head for being dumb and there were only a handful of times when I wanted to pull Jamie’s hair but overall, this was good reading.

The romance between Scott and Jamie was sweet and it wasn’t complicated, which I appreciated. It was a straight contemporary romance about two people who met, fell in love and then figured out how to be together. The cast of characters were fun to get to know, the romance was pretty steamy and the two main leads were likable characters.

I liked that this wasn’t one of those drag you through the emotional mud kind of romances. I liked seeing two characters fall in love and figure their shit out together. It didn’t take itself too seriously and sometimes, you just need that kind of romance. This was perfect for that.

One response to “Review: Fully Ignited by Shannon Stacey”