The Boston Fire series by Shannon Stacey follows a team of firefighters who take that journey to true love. Each story follows a different firefighter and Hot Response follows Gavin Boudreau as he falls in love with Cait Tasker. Their story is super cute and you should definitely check it out. You can read my review here. Today we’re sharing an excerpt from the book provided to us by the lovely, Shannon Stacey herself. “I wanted to talk to you about something, and I thought…” She paused, and then made herself say it. “Maybe over breakfast.”

He looked confused for a few seconds, not that she could blame him. Nothing in their past interactions indicated she’d ever have an interest in sharing a meal with him, and the incident in the hallway after delivering the baby had probably made him believe she didn’t like him at all.

“Or just a coffee or something,” she said when he didn’t respond right away. “It won’t take long.”

“I could go for breakfast right about now. I was going to go around the corner if you want to join me?”

They walked in silence to the tiny restaurant only locals would know was even there and took a table in the back. There were a few other diners, but nobody that she recognized as somebody she wouldn’t want eavesdropping. Most of the firefighters probably went straight home to crash in their beds for a while, she thought. Or maybe Gavin hadn’t given them the heads-up on the good food to be had. Cait had grabbed coffee and pastries there a few times, but she’d never sat and had a meal.

“This is a bit of a surprise,” he said once they had their coffees and had ordered the veggie-filled omelets the place was famous for, minus onions for Gavin and both with bacon and wheat toast on the side.

After tossing and turning all night.

“You okay? From yesterday, I mean?”

He leaned back in his chair and grinned. “You mean the part where you implied I don’t take my job seriously?”

Yeah, that part. And why did he have to have such a great smile? “See, you’re doing it right now.”

“That smile that probably makes women’s pants fall off.”

“I was just checking to see if your pants fell off.” The lift of his left shoulder matched the curve of his mouth. “I guess I’ll have to try harder.”

Oh god, please don’t. Cait had never been so thankful she wasn’t prone to blushing because if she was, her face would be as red as the ketchup bottle. She’d come here to apologize for being a bitch to him and, before she’d even addressed her hostility toward him—or at least the part she was willing to admit to—he was implying he’d like to get her out of her pants.

It was obviously just a habit, she told herself. Gavin was probably just a natural charmer who never had to try. And if he did have to try harder…well, what man could resist a challenge?

She tried to focus on that assumption about his character so she wouldn’t be able to focus on the fact he could probably make her pants fall off without too much of an effort at all. Of all the people she came across on a daily basis, she would have bet he was the last person who had a shot, but there was something about his carefree confidence that might grate on her nerves when they were at a scene, but was sexy as hell when he was sitting across a table from her. And between the added stress and reduced privacy that moving back home had brought, she was barely managing to have a social life, never mind a sex life.

She needed to get this conversation back on track, though, before he tried to up his game. “I want to apologize to you.”

“There’s no need for an apology. Believe it or not, the pants don’t always fall down. It happens. Not often, but it happens.” The expression on his face was almost as cocky as the words, and she was about to tell him to forget it—he was exactly who she’d originally thought he was—when he dimmed the high-wattage grin to a sheepish smile and shook his head. “I’m joking. And yes, I do that too much.”

“Why not? I like to laugh. This is the only life I know for sure I’m getting, so I’m going to have fun while I’m living it.” He looked at her, his expression more sincerely thoughtful than she’d thought him capable of. “Maybe sometimes I take it too far. I don’t even know how many times in my life my mom’s told me I don’t know when to quit. But that doesn’t mean I’m not doing my job.”

Cait forced herself not to look away from his direct gaze. “That’s what I wanted to apologize for. What I said the other day, when we delivered that baby, was out of line. You obviously take your job seriously and rumor has it you’re good at it. I’m sorry I said that.”

She half-expected him to make some kind of smart-ass remark or gloat in some way, but the smile he gave her was warm and genuine. “Thank you. I accept your apology. And I’m sorry, too. I might have pushed your buttons a little on purpose because you’re so easy to rile up.”

He wasn’t wrong, but he hopefully hadn’t guessed on how many levels he got her wound up. She was going to say something about being sensitive to him pushing her buttons, but she couldn’t figure out how to say it without the possibility of the conversation spinning into innuendo.

“So tell me something, Cait. Since we’re on the subject, why don’t you like me?”

“I don’t know you well enough to not like you.”

“Okay.” He fiddled with his coffee mug, turning it in his hands. “I’ll put it another way. I’ve wondered why you react to me in a way that makes other people ask me what I did to piss you off.”

“They do not.” When he just stared at her, one eyebrow raised, she looked away first. “What did you say?”

“You mean what I tell them I did to piss you off? I breathed.”

Ouch. But that was why she’d invited him to breakfast in the first place—to apologize and talk through whatever their problem was. Whatever her problem was. “I don’t know what it is about you that rubs me the wrong way.”

So much for keeping the conversation innuendo-free, she thought, barely stopping herself from slapping her palm over her face.

“Pent-up sexual tension between us?”

She laughed, because she knew he was joking. Or she was fairly sure he was, at least. “You’re cocky.”

She propped her chin on her hands. “Tell me the difference, then.” 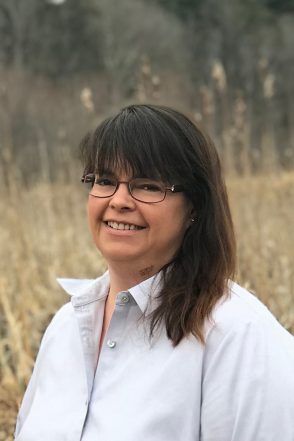 New York Times and USA Today bestselling author Shannon Stacey lives with her husband and two sons in New England, where her favorite activities are writing romance and really random tweets when she’s not riding her ATV. She loves mud, books, football & watching way too much TV.

One response to “Sunday Spotlight: Hot Response by Shannon Stacey”