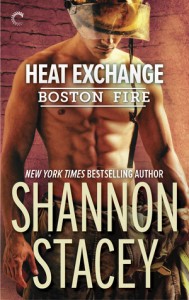 Lydia Kincaid's shipping back to Boston, but she's not happy about it. She left to get away from the firefighting community—her father was a firefighter, her brother's a firefighter and, more importantly, her ex is a firefighter. But family is number one and her father needs her help running the pub he bought when he retired. Soon, Lydia finds it hard to resist the familiar comfort and routine, and even harder to resist her brother's handsome friend Aidan.

Aidan Hunt is a firefighter because of the Kincaid family. He's had the hots for Lydia for years, but if ever a woman was off-limits to him it's her. Aside from being his mentor's daughter, she's his best friend's sister. The ex-wife of a fellow firefighter. But his plan to play it cool until she leaves town again fails, and soon he and Lydia have crossed a line they can't un-cross.

As Aidan and Lydia's flirtation turns into something more serious, Lydia knows she should be planning her escape. Being a firefighter's wife was the hardest thing she's ever done and she doesn't know if she has the strength to do it again. Aidan can't imagine walking away from Boston Fire—even for Lydia. The job and the brotherhood are his life; but if he wants Lydia in it, he'll have to decide who's first in his heart.

Lydia was born and raised in Boston but left two years ago to live in New Hampshire after her divorce. She had been raised by in firefighter family with both her father and brother being firefighters and then had married one as well. She had worked at her families bar and really liked it but she felt like she was living in a fishbowl and never had any privacy. She enjoyed living in NH but missed her family. When her sister called needing help she wasn’t thrilled but quit her job to head back to Boston temporarily.

She’s working the bar when in walks her brother with his best friend Aidan who she’d known for years. Now, however, she was looking at him really differently and couldn’t keep her eyes off of him. She knew it was wrong as there was a code among firefighters. It was put like this:

“You don’t date the other guys’ ex-girlfriends. Or ex-wives or sisters or…hell, mothers or daughters. You don’t fish in the station’s pond.”

She knew that it would cause problems in her family and with her brother’s friendship with Aidan if she got with him but apparently he felt the same burning attraction and couldn’t keep away either.

“Why do I want you so much?” he whispered against her lips.

“It doesn’t make any sense.”

“It doesn’t.” He brushed his thumb over her cheekbone, looking into her eyes. “I don’t care.”

They start an affair that was just supposed to be about “getting it out of their systems” but we all know how those things go. Soon they’re spending more and more time together and falling in love but when everyone finds out about their relationship it may be more of an end to everything before they can even decide what exactly they want from each other.

Shannon Stacey has a way of writing that I find so easy to read. I started this book knowing I like her writing but otherwise now knowing what to expect from this new series. I shouldn’t have been surprised that I started it and then was completely hooked. I honestly didn’t put the book down until I was done (which didn’t take long at all as I was gobbling it up).

There were so many things to like about this book. I really loved both Aidan and Lydia and thought both of them played off of each other so well. Except for Lydia’s issues with being with another firefighter they were perfect for each other. Then there was the side story of Lydia’s sister, Ashley and her separation from her husband, Danny. That was an interesting story and talked about an issue that’s prevalent in a ton of marriages – lack of communication.

The romance was obviously the main part of the story but other parts stood out too: family loyalty, friendship, a bit of firefighting all played a big role and added a great element to the book.

Overall I really enjoyed this one and can’t wait to read the next book in the series.