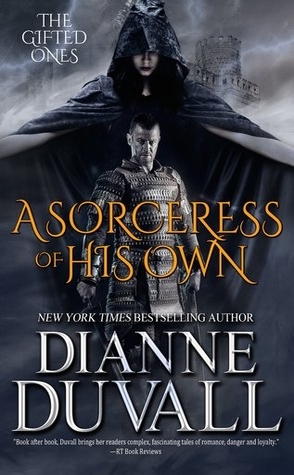 From the New York Times bestselling author of the acclaimed Immortal Guardians series comes an enchanting new series full of romance, danger, and loyalty: The Gifted Ones
Since the day Lord Dillon earned his spurs, rumors of his savagery on the battlefield have preceded him into every room, stilling tongues and sparking fear. Weary of battle, he wishes only to find a woman he can wed who will approach him not with fear, but with the tenderness that has been absent from his life for so long. Yet only the wisewoman seems invariably at ease in his presence. Perhaps because she garners the same fear in others that he does himself.
For seven years, Alyssa has been by Lord Dillon's side, counseling him from the shadows, healing him with her hands, and staving off the worst of his loneliness while his fearsome reputation keeps others at bay. Blessed--or cursed--with gifts that label her a sorceress, she is forced to conceal her youth and the love she harbors for him beneath umbral robes that lead Dillon and his people to believe she is the same aged wisewoman who served his father.
All is revealed, however, and passions flare when an enemy threatens Dillon's life and Alyssa sacrifices everything to save him. When Dillon discovers that the wisewoman is far from elderly, he is instantly entranced. And, as he and Alyssa work together to defeat an enemy bent on destroying them both, Dillon will risk anything--even the wrath of his king--to be with her.

Alyssa has been in love with Lord Dillion for years. Although they can never be together, Alyssa has found a way to be there for Dillion. Taking her grandmothers position as Dillion’s healer & advisor, Alyssa will do anything to keep Dillon safe. She hates keeping her true self from Dillon, but she’s knows it’s necessary. Dillon has one confidant; his sorceress. The woman that heals him, helps him, and keeps him safe. Without her, he would probably be dead and he knows that. Over the seven years he has been an Earl, Dillon has developed a relationship with his sorceress.

Alyssa knows that they can never be together, even if Dylan did know who she truly was. Then she heals Dillon from a fatal injury, taking that injury on herself. While Dillon always thought she was an old woman, she is also his closest friend and confidant. He’s finally seeing his sorceress for who she truly is and he knows that he will never let her go. Damn the king and damn the rules. Alyssa is not a noblewoman and she knows that Dillon will lose everything if he tries to stay with her. She’s taking the time she has with him because she knows that it has to come to an end. Dillon is determined to find a way because he won’t give up the woman that he’s been looking for. Alyssa is everything he wants in a woman and more.

I loved both Alyssa & Dillon. I loved the banter, I loved how there were no games between the two. This is a true love story. I enjoyed every minute spent reading it. 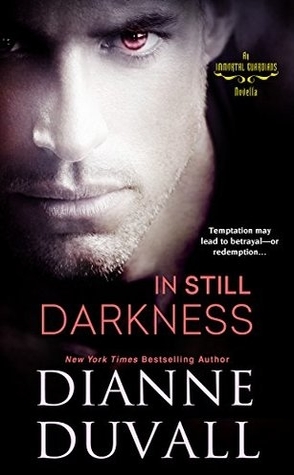 Originally published in "Predatory"
In Dianne Duvall s world of Immortal Guardians, the stakes for mortals are high, but the cost especially to the heart might be higher "
It s not the first time Immortal Guardian Richart d Alencon has saved a human life from eternal damnation. Usually, he moves on, a nameless savior like a ghost in the night. But this time he can t seem to forget the woman who rewarded him with a sensuous kiss after he rescued her from a trio of vampires. While Richart knows that loving a human can only bring trouble, the taste of forbidden lust is too great to resist
Jenna never imagined she d end up a single mom working overtime to put her son through school. But she might have daydreamed once that a devastatingly gorgeous Frenchman would sweep her off her feet. Now that a package of tall, dark, and handsome seems intent on doing just that, doctors are telling her she may not have long to live. But Richart is telling her just the opposite. All she has to do is abandon her humanity
Includes a special sneak peek of Night Unbound

In Still Darkness (Immortal Guardians #3.5) by Dianne Duvall is a novella set in the same timeline as books 2 and 3 of this series, so there’s a bit of overlap. At the time I read this I had only finished book 2 in the series, but I didn’t feel like I missed anything.

Richart d Alencon rescues a woman from 3 vampires and ends up become attached to her. She’s a single mother and used to relying on herself. It comes as a surprised that someone so polished and clearly out of her league is showing an interest in her. Until she finds out his secret.

Richart has never been drawn to someone the way he is to Jenna. He knows he should stay away from her, but he can’t. When he finds out a vampire has been biting her without her knowledge, he knows he’ll do whatever it takes to save her. Even if it means making her Immortal.

I thought this was a sweet story. I really liked how Richart and Jenna were together. I also liked the way John, Jenna’s son, was with both Richart and his mom. I did roll my eyes a bit at the way it ended, but it’s nothing more than I’ve come to expect from this author, so it wasn’t surprising. I really liked how it gave us another perspective on some things that happened in the previous book. 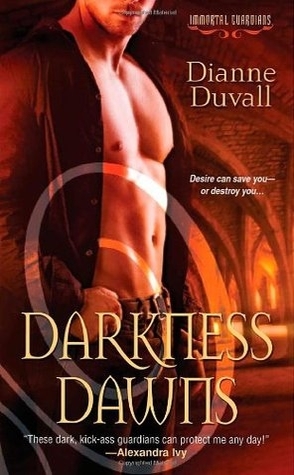 In this dazzling, sensual novel, Dianne Duvall beckons readers into a world of vampires, immortals, and humans with extraordinary gifts…where passion can last forever, if you’re willing to pay the price…
Once, Sarah Bingham’s biggest challenge was making her students pay attention in class. Now, after rescuing a wounded stranger, she’s landed in the middle of a battle between corrupt vampires and powerful immortals who also need blood to survive. Roland Warbrook is the most compelling man Sarah has ever laid hands on. But his desire for her is mingled with a hunger he can barely control…
In his nine centuries of immortal existence, no woman has tempted Roland as much as Sarah. But asking her to love him is impossible—when it means forfeiting the world she’s always known, and the life he would do anything to protect...

Darkness Dawns is the first book in Duvall’s Immortal Guardians series. While this isn’t my favorite book, I really enjoyed the world that has been created.

Roland has been an Immortal Guardian for hundreds of years. Roland is slow to trust due to the fact that he was betrayed by two women he thought he loved. Sharing his secret has not done him well in the past & he has no intention of ever sharing his secret again. Sarah has no idea that the paranormal exists. She has no idea what an Immortal Guardian is and vampires? Seriously? I thought she took it rather well, even a little too well.

Overall, this book is not the best in the series. It’s actually my least favorite, but I have been really enjoying Roland & Sarah in subsequent books. Overall, I’m really glad I read this one.