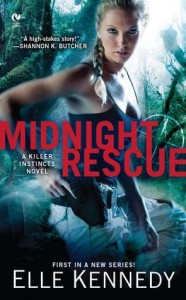 Dangerous. Ruthless. Savage. And she's the good guy.
Abby Sinclair had a desperate childhood until she was rescued and adopted by a retired army ranger who molded her into a master of self-defense. Now, she's a cunning and fearless assassin thrust into assignment after dangerous assignment, using everything she has-nerve, resilience, strength, sex-to come out on top. Her only rule: trust no one.
Abby's latest assignment is in Columbia: go undercover and snuff out a dangerous arms dealer active in the underground sex trade. But when Abby purposely blows her cover in a last-ditch attempt to free the helpless victims, deadly mercenary Kane Woodland is recruited as back-up. His mission: get Abby out of that hell hole.
The last thing Kane expects is to feel a primal attraction for Abby. But when she convinces him to join her on her perilous mission, their newfound passion could put the lives of their whole team at risk.

I’ve been meaning to read the Killer Instincts series for awhile now. I wish I wouldn’t have put it off, because this series seriously rocks it.

Abby Sinclair is a heartless assassin. Or so she thinks. Deep undercover, her job is to bring down an arms dealer that dabbles in sex trafficking. Until she blows her cover to try to save a handful of girls that are about to be sold into the black market. Abby thinks she has everything under control, but her boss disagrees. When the Queen of Assassins thinks you’re in trouble, nothing stops her from doing what needs to be done.

Jim Morgan and his mercenaries are called in to go to Columbia to rescue Abby. That doesn’t happen a moment too soon. What they don’t expect is after they get her to safety, she wants to go right back. No one can talk her out of it, not even Kane Woodland. Her rescuer and the man she is reluctantly attracted to is someone she can’t trust even though he seems to be on her side. Abby learned a long time ago that men aren’t to be trusted. The only man she ever trusted was her adoptive father and he went and died on her.

Kane thinks Abby is crazy, but he knows there is no way to stop her from going back to Columbia. He’s all in. He doesn’t even try to fight the attraction he feels for Abby. He knows that she’s not the the person for him. She doesn’t trust at all. She’s completely closed off emotionally. Or so he thinks. It doesn’t take Kane long to see Abby for who she truly is and that’s not the heartless assassin everyone thinks she is.

Still, Abby’s secrets might drive Kane away and ruin the fragile connection they have. While I liked Abby, she wasn’t my favorite heroine. I appreciated what she went through as a child and how she became strong. I even understood how she couldn’t get over it. I wouldn’t have gotten over it. It was just that Kane was so open and honest and she couldn’t return it even to him. It got annoying. Still, the supporting characters and the storyline were good enough for me to move forward with the series and I’m glad that I did.