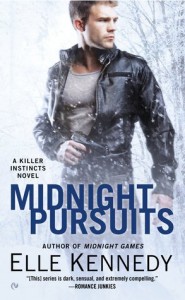 Her job is to stay hidden.Too bad he can’t take his eyes off her.
Soldier-for-hire Ethan Hayes is the youngest member of an elite mercenary team. While he may be affectionately nicknamed the rookie, the skills Ethan honed as a Marine make him seriously dangerous. But when a sudden distress call puts him in close quarters with a rival, he finds more than his field skills being put to the test.
Juliet Mason stands out as the master thief in a covert group of assassins and spies. Her latest mission is personal—and it’s gone horribly wrong. Juliet may prefer to work alone, but when the rookie comes to her aid in snowy Eastern Europe, she can’t deny they make a good team. But even up against a powerful enemy, their most challenging task yet may be fighting the passion between them...

Still in love with this series.

The Queen of Assassins assassins are dropping like flies for Jim Morgan’s mercenaries. It is quite amusing. Juliet Mason has no intention of falling for Ethan Hayes. The rookie merc is too young, too green, and too innocent for her. She can’t deny the attraction to herself, but she can deny Ethan. Which she has and will continue to do. Then she gets into trouble and finds that Ethan is the one that comes to her rescue.

Juliet is a thorn in Ethan’s side. Since the day he met her, she has rubbed him the wrong way. She has yet to see him as anything but a boy, but he’s determined to prove her wrong. He gets the chance when she phones Isabel for help and gets him instead. He questions why he feels the need to race to her rescue, but still does it. The feelings the Juliet invokes in him are something that he’s accepted.

When he finally is at her side, he realizes that Juliet is in more trouble than he first realizes. She’s on a revenge mission. Her brother has been murdered and she will stop at nothing to avenge him. Ethan can’t do anything but stay by her side and help her. He’s determined to show her that he’s more than “the rookie”.

I love the suspense in this book. Juliet is a badass. She freaking broke the Siberian Wolf who is the assassin that killed her brother. Only Juliet or her boss could do something that awesome. Yet when she’s around Ethan, there’s a side to her that is only for him. Elle Kennedy writes these characters and their relationships in a way that I haven’t read for some time. The heroes and heroines are hardcore, but when it comes to their relationships, they change.