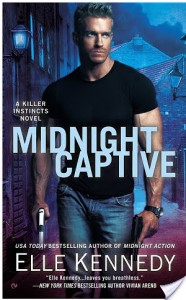 “For those who enjoy their romantic suspense on the dark and steamy side,”* here’s the blisteringly sexy new novel in the Killer Instincts series by the author of Midnight Action and Midnight Pursuits...
Former CIA agent Bailey Jones has spent months trying to forget her night of passion with mercenary Sean Reilly. An elite and methodical assassin, she has no room in her life for a reckless, rule-breaking Irishman, and she’s vowed to steer clear of the tempting bad boy who lured her into his bed under false pretenses.
When Sean is implicated in the robbery of a Dublin bank, Bailey knows something isn’t right. So what if she can’t trust him? There’s no way Sean would end up on the wrong side of the law. In fact, he’s stuck in the middle of a dark and dirty conspiracy that could put his twin brother’s life at risk with one wrong move. And Bailey’s life too when she agrees to help.
As the stakes are raised and Bailey finds herself torn between two brothers, the fine line between danger and desire is crossed…and it’ll take more than a killer instinct to survive.
*New York Times bestselling author Christina Reece

There is always a character in a series that pisses you right off. Bailey Jones was it for me. What a raging bitch. I have no idea what Sean saw in her. There were almost no redeeming qualities in her. She lied to herself, she lied to Sean, she lied to everyone. She constantly hurt Sean. It was unbearable.

Bailey was visiting her friend and fellow assassin, Paige, when she saw the news about a bank in Dublin being robbed. Even with a mask on his face, she immediately recognized Sean Reilly. She immediately springs into action and leaves London for Dublin, determined to help me. A year ago, she had an unforgettable night with Sean, but Sean thinks that Bailey thinks it was his twin brother, Oliver, she was with. She’s happy to let him think that because Sean is dangerous to her. She doesn’t question why she’s racing to his rescue. She tells herself it’s for Oliver. Because when Sean is in trouble, Oliver is not far behind.

While in the bank, Sean is wondering how he and Oliver let themselves get in this bloody mess. They got out of Dublin years ago and are in the information business now. Him and Ollie are happy with their lives and want nothing to do with their father’s legacy. Unfortunately his former boss, Rabbit, has other ideas. Which include kidnapping Ollie to make Sean get a thumb drive from the bank.

While he’s formulating a plan to get out, who drops in other than Bailey, the woman he’s been after for five long years. It doesn’t surprise him. She’s been in love with Oliver for five years. She would come running the moment that he’s in trouble. He still feels guilty for taking her from Oliver. Not guilty enough to regret the night that changed his life. Bailey on the other hand just wants to get Sean out of there and has no thought to where Ollie is. She just wants Sean safe.

They work together to get Oliver free and to take care of business for Rabbit. Back to their relationship; it’s fucked. Sean is fiercely, obsessively protective of Bailey. Her safety is his number one concern. He knows she can take care of herself, but he doesn’t want to put her in a position where she has to do that. That maddens her. It also reminds her of her former boss, who took over her life and job. So I did understand Bailey in that way, but Sean wasn’t trying to take over her life. She was still a bitch.