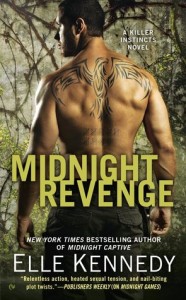 From the USA Today bestselling author of Midnight Captive, the latest Killer Instincts novel is “off-the-charts-hot”* romantic suspense that takes readers into the heart of an enigmatic mercenary...
Out of all the stone-cold mercenaries in Jim Morgan's black ops organization, Derek “D” Pratt is the most intimidating. He is tight-lipped and covered in tattoos, and even the other guys on his team are afraid to ask him about his past. D’s been off the grid for years, but after his teammate Sullivan is mistakenly captured in his place, D is forced to come out of hiding and face his demons.
When D lands in Mexico, he’s ready to risk everything to save his friend. To complicate matters, Sofia Amaro, a feisty doctor whom D had a one-night stand with months ago, has tracked him down. And in an instant she’s unintentionally caught up in his life-threatening rescue mission.
Now D must extract not one but two people from the most violent world he's ever encountered. And one of them is carrying his child...

Of all the books in the series, this was the one I wanted the most. Well, after Trevor and Isabel.

Derek Pratt has been the most elusive of Jim Morgan’s mercenaries. He’s been a total dick since Midnight Rescue. It’s always been somewhat strange that he’s even on the team. He’s almost an anti-hero. He’s even fucked (there’s no other word for it), Noelle, the Queen of Assassins. Which is strange. I had no idea how Kennedy would write a heroine that could put up with him. He doesn’t make apologies for who he is. He’s there for the rush and the adrenaline. He tells himself that he doesn’t care about his teammates, but that’s a lie.

When his teammate, Sullivan Port, is mistaken for him and taken in his place, D knows he has to make it right. He accepts that his past has finally caught up with him. He doesn’t accept that someone close to him has been caught in the crossfire. He heads to Mexico after he gets a lead to Sully after six months of silence. What happens next is something even D never expected.

Sofia Amaro spent one night with D and she ended up pregnant. She doesn’t want to tell him over the phone, so she chases him down to Mexico. That’s something that I have a problem with. I don’t understand heroines that put themselves in danger. She’s pregnant so she should be thinking of someone other than herself. She knows what D does for a living, but she went after him anyway. It doesn’t really matter that she went with an escort, she still put herself in danger.

Sofia continued to make bad decision after bad decision. She fell in love with D for reasons I couldn’t understand. He was a total dick to her. She obviously saw something in him that I didn’t. Not that he wasn’t amazing, because he was. This couple just didn’t click for me. I don’t know why. I really wanted them to, but they didn’t.