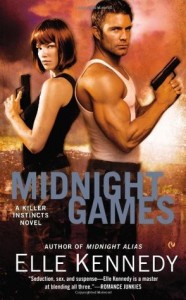 She wears a thousand deadly identities. He sees through them all.
A master of disguise, Isabel Roma spends her life pretending to be other women. Normally, her emotions are reined in tight—but sexy mercenary Trevor Callaghan has a knack for getting under her skin. The elite operative’s quiet strength and raw magnetism affect her in ways she’s never felt before, a distraction that can quickly turn deadly in their dangerous line of work.
After putting his tragic past behind him, Trevor is ready to focus on his future—and he damn well intends for Isabel to be in it. When their entire operation is thrown into chaos, Trevor enlists Isabel’s talent for deception. And as they attempt to save their team in a world where the stakes are high and the danger is grave, Trevor must convince Isabel that the woman beneath all the disguises is the one worth having...

It bears repeating. I love this series. Love it. Have I said it enough? You’re missing out if you haven’t read it. Midnight Games is my favorite book of the series and I’ve read the entire series by now. Trevor and Isabel? Sigh. I heart both of them.

Jim Morgan’s compound has been attacked. Shocking. The place is a fortress, so how the fuck has that happened? I am still in shock and it happened, like, three weeks ago. People died. It was heartbreaking. Trevor and Isabel were in the middle of a heart-to-heart and they needed it. After Midnight Rescue and Midnight Alias, those two had some crap to work through.

In Midnight Rescue, Trevor was a hot mess after the death of his fiancé. He wanted nothing to do with life. Isabel was all life and wanted nothing to do with Trevor on their mission. She was worried that he would get them both killed, which he almost did. Instead, she saved his life and got shot in the process. In Midnight Alias, she got scared and ran, leaving him waiting for her. See? Heartbreaking. This time Trevor isn’t going to let her go so easily. There is that pesky little thing about figuring out who is trying to kill the team. And finding their boss, who is suddenly off the grid.

The team heads to Monte Carlo after they get a lead on who hired the team that attacked the compound. They have no idea why this guy wants to kill them, but why does anyone go after a group of mercenaries? Bringing in the Queen of Assassins, Noelle is heading the op and is none too happy about brining her people in. She and Jim’s relationship is contentious at best.

It isn’t long before they discover that the attack tracks back to the first mission that Isabel and Trevor were on together. Isabel immediately takes the deaths from the compound on her own shoulders and draws even further away from Trevor. Trevor doesn’t let Isabel get away that easily.

I adored this book. I loved how much Trevor changed and grew from Midnight Rescue. He took a painful loss and grew from it. He realized that he loved Isabel and wouldn’t let her hide from him. This couple is one of my favorites so far this year.

One response to “Review: Midnight Games by Elle Kennedy”