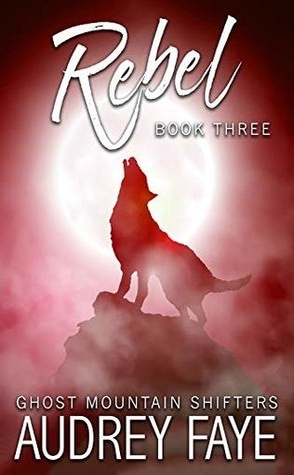 A note from Audrey: Some series can be read out of order - this isn’t one of them. Start with Alpha and welcome to Ghost Mountain!

A baby alpha who absolutely doesn’t want to upend her pack—and is going to do it anyhow.

Kennedy is a badass and she knows it.
She’s also scared. That she’s too strong. Too fierce. Too much. That her pack won’t be able to hold her, no matter how much she wants to stay.
We’ll just see what her pack has to say about that.

Rebel by Audrey Faye is the third book in the Ghost Mountain Wolf Shifters series. This is a series that should be read in order. The growth of the pack as a whole will lose impact if you don’t see where they started.

Kennedy is a 14 year-old with a very strong wolf. The entire pack knows she’s an alpha, and she’s afraid she’s going to lose her pack because of it. She’s afraid her wolf won’t be able to accept Hayden as alpha. As they heal, her wolf only gets stronger, and that means she may have to leave. But with the help of another very strong wolf, and the support of her pack, she’s able to create a Baby Pack of her own. As she navigates what it means to truly be an alpha, she also sees where her pack needs to go to finish healing…even if that means she’s going to have to leave sooner rather than later.

This is a series about a healing pack. It isn’t very often we see the focus on pack dynamics to this degree, and I’m loving it. There is very little external conflict in these books. It’s all about this pack healing and realizing their potential. I really enjoyed Kennedy and the other teenagers in the previous books, and I’m glad to see more of them here.

I like how the message – that submissives have power – is conveyed, and how the teenagers see the future better than the adults sometimes. I do feel like Hayden isn’t really living up to his role as Alpha. I understand that he needs to be holding the cape of others so they can shine, but he very much feels like an afterthought. I would love to see him front and center, taking a more active role in the future of the pack. That’s not to say I want him to take over, but it feels like he’s being sidelined and it doesn’t really work in context.

That aside, I love how the pack is coming together and figuring out their strengths. This journey is all about empowerment and healing and I’m here for it.