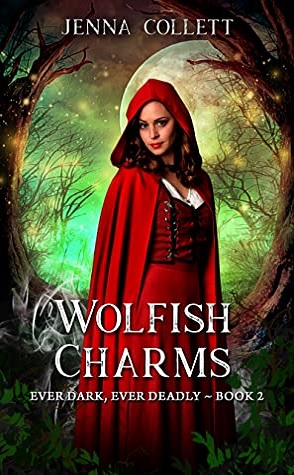 The wolves are at her door, but can she trust the villain offering her salvation?

Vivian James took seeing ghosts for granted until the day they vanished along with the person she cared about most. Now, plagued with visions of the future, all she wants is revenge on the creature that destroyed her life.

Even a devil's mask can slip.

Argus Ward is hunting the creature wreaking havoc in the kingdom. He used the kingdom's oracle to track its movement, but now that the oracle is dead, he'll need to use Vivian. She might be a fool to put her trust in a gangster, but there's something about him that keeps drawing her in.
Their partnership is straightforward, find the beast and get revenge. But, things are never that simple when love, murder, and werewolves get in the way.
Book two in the Ever Dark, Ever Deadly Series.

Wolfish Charms by Jenna Collett is the second book in the Ever Dark, Ever Deadly series. This is a take on Little Red Riding Hood, with some twists. I enjoyed the story a bit more than the first, Spellbound After Midnight.

Vivian is a Medium. She’s always been something of an outcast, since no one wanted to be friends with the weird girl who can see and talk to ghosts, so she mostly spends time with her best friend Tess and her ghosts. Until the night her grandmother and her ghosts disappear. Now she’s having visions of the future and trying to keep Angus Ward, the most notorious gangster in the land, at bay. The problem? She feels safe with Argus, and staying away from him goes against all her instincts.

Argus is determined to find the werewolves who have been terrorizing the city and to find help for his sister, who was bitten. He needs the Oracle’s help to find a magic dagger that will cure his sister. He almost had it, but it was stolen out from under him the night the Oracle died. Now he needs Vivian’s help.

I really liked Vivian and Argus, and I liked the mystery surrounding the deaths taking place in the Kingdom. Argus was something of an anti-hero. He definitely had shady dealings and wasn’t the best guy, but he had hidden depths. I liked how he tried to keep Vivian at a distance but couldn’t stay away.

From other reviews I’ve read it seems I’m the outlier, but I didn’t care for Tessa, Vivian’s best friend and the heroine of the first book, Spellbound After Midnight. I liked her well enough when I read that book, but her insecurities really got out of control. The next book features her and I’m on the fence about reading it. I’m looking forward to the following book, however. Bring on Liana and Bowen.

Ever Dark, Ever Deadly

One response to “Review: Wolfish Charms by Jenna Collett”