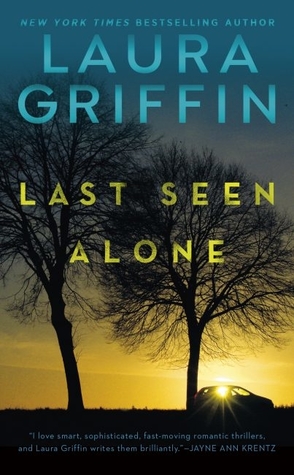 When they face the most baffling missing person's case of their careers, a fiercely ambitious lawyer and a homicide detective have no one to turn to for help except each other, from New York Times bestselling author Laura Griffin.
Up-and-coming attorney Leigh Larson fights for victims of sexual extortion, harassment, and online abuse. She is not afraid to go after the sleaziest targets to get payback for her clients. Leigh is laser-focused on her career--to the exclusion of everything else--until a seemingly routine case and a determined cop turn her world upside down.
Austin homicide detective Brandon Reynolds is no stranger to midnight callouts. But when he gets summoned to an abandoned car on a desolate road, he quickly realizes he's dealing with an unusual crime scene. A pool of blood in the nearby woods suggests a brutal homicide. But where is the victim? The vehicle is registered to twenty-six-year-old Vanessa Adams. Searching the car, all Brandon finds is a smear of blood and a business card for Leigh Larson, attorney-at-law.
Vanessa had hired Leigh just before her disappearance, but Leigh has no leads on who could have wanted her dead. Faced with bewildering evidence and shocking twists, Leigh and Brandon must work against the clock to chase down a ruthless criminal who is out for vengeance.

Brandon found his partner exactly where he’d expected. Antonio stood beside the food truck in front of the courthouse, pumping ketchup onto a pair of hotdogs.

He glanced up from his lunch as Brandon approached.

Antonio frowned. “So, what’s the problem?”

Brandon couldn’t say how, exactly. But he had a nose for BS. And Leigh Larson, attorney-at-law, had been lying through her pretty white teeth.

“But why would she lie about knowing Vanessa?” Antonio asked.

With his hotdogs fully loaded, Antonio stepped away from the food truck. Day or night, rain or shine, his partner never missed a meal. Even after grabbing less than three hours of sleep, he’d shown up for work this morning with bag full of breakfast tacos. The kid worked out like a maniac and was constantly scarfing down food.

“These are good.” Antonio said around a mouthful. “You want one?”

Brandon glanced back at the courthouse, where the security line still stretched all the way to the park.

He turned around. “What’s that?”

“The attorney.” Antonio smiled. “Don’t tell me you didn’t notice.”

Brandon didn’t comment. He’d have to be dead not to notice. Leigh Larson was definitely hot. The skirt, the heels, the sleek dark hair pulled back in prim bun.

But the main thing he’d noticed was her eyes. They were forest green, and they’d gone from surprised to wary the moment she noticed him watching her. She’d taken one look at him and tried to hightail it out of there.

Not exactly the response he usually got from women. Criminals, yeah, but not women in general. She’d said she was late for court, and that explained the rush, maybe, but it didn’t explain the lie.

Leigh Larson had lied to him—he was sure of it. What he didn’t get was why.

“Well, we may have a better lead anyway.” Antonio crumpled his first wrapper into a ball and pitched it into a trash bin before chomping into the second hotdog. “The lab called while you were in there. They just got the Toyota in. Who’d you talk to over there?”

“Oh, yeah? Well, she must like you because they bumped us to the front of the line. They’ve already started processing the vehicle and get this. The smear on the door? They did a quickie test and confirmed the blood is human.”

Brandon wasn’t surprised. After four years in homicide, he was good at reading stains. The real question was, did the blood belong to Vanessa Adams, who was still apparently missing after abandoning her car on that highway more than fourteen hours ago?

And then there was the pool of blood Antonio had discovered in the woods. It was no small amount, and one look at it had prompted Brandon to get on the phone with his lieutenant to request a team of CSIs out there, stat, to process the scene.

Brandon took out his phone now and pulled up the photo he’d taken last night. The blood pool—still coagulating—had been discovered beside a burned tree stump. The sight had put a lead weight in Brandon’s gut as he tried to imagine what happened. Someone had been injured or worse, and the logical candidate was Vanessa. Had she been shot? Stabbed? Bludgeoned?

Despite combing the area, they’d turned up no shell casings or drag marks—nothing beyond that one pool of blood by the stump in the woods.

At this point, they didn’t know if that blood matched the smear in the car, or if it was Vanessa Adams’s. To determine that, they needed DNA tests, which meant submitting samples to the notoriously backlogged DNA lab, and jumping to the front of that line would take a hell of a lot more than a friendly phone call to Jane, especially since their case wasn’t even officially a homicide.

Laura Griffin is the New York Times and USA Today bestselling author of more than twenty-five books and novellas. Her books have been translated into fourteen languages. Laura is a two-time RITA® Award winner (for Scorched and Whisper of Warning) as well as the recipient of the Daphne du Maurier Award (for Untraceable). Her book Desperate Girls was named one of the Best Books of 2018 by Publishers Weekly. Laura lives in Austin, Texas, where she is working on her next novel.