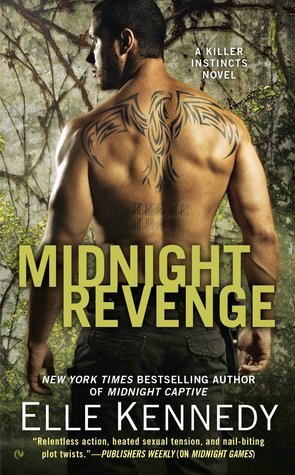 From the USA Today bestselling author of Midnight Captive, the latest Killer Instincts novel is “off-the-charts-hot”* romantic suspense that takes readers into the heart of an enigmatic mercenary...

Out of all the stone-cold mercenaries in Jim Morgan's black ops organization, Derek “D” Pratt is the most intimidating. He is tight-lipped and covered in tattoos, and even the other guys on his team are afraid to ask him about his past. D’s been off the grid for years, but after his teammate Sullivan is mistakenly captured in his place, D is forced to come out of hiding and face his demons.   When D lands in Mexico, he’s ready to risk everything to save his friend. To complicate matters, Sofia Amaro, a feisty doctor whom D had a one-night stand with months ago, has tracked him down. And in an instant she’s unintentionally caught up in his life-threatening rescue mission.   Now D must extract not one but two people from the most violent world he's ever encountered. And one of them is carrying his child...

Ladies and gentlemen, we are finally getting Derek Pratt’s story. The silent, mysterious asshole dude is finally getting his story told and as soon as I could, I was all over this book because I’ve been waiting 6 books for it. There were times when I thought I didn’t want D’s story because he was such a dickhead asshole to everyone on the team.

He’s used to working alone and prefers it that way but man, my curiosity over him and his background grew and grew until I had ants in my pants and I couldn’t wait to start it. Now that I’m done with the book, I’m quite satisfied. It was everything that I wanted and expected from D’s book and even though Sofia got on my hot damn nerves in the beginning, I came around where her character was concerned.

So this book picks up after Midnight Captive and if you remember from the end of Midnight Captive, someone from the team was taken captive and the people that took this team member thought he was D so fast forward to now and it’s months later and we’re no closer to getting the team member back and one of the other teammates is barely holding it together because he blames himself but holy crap, that whole part of the story really broke my heart.

I won’t lie and say that this was the perfect read because it wasn’t. There were times in the beginning when I wanted to pull Sofia’s hair (because she’s pregnant, I didn’t want to smack her) because she got herself into unnecessary trouble. I get that she’s strong and independent but I can’t stand heroines who put themselves in danger and don’t listen to reason. It pisses me off but D gets them out of danger eventually so I came around but holy cow was I pissed at both Sofia and Liam. Both were emotionally driven in this one and I wanted to smack some sense into both of them in the beginning.

I really dug digging into D’s past and finding out what happened to make him the way that he is now. His character has always been tinged with a burning rage that at times was off putting for me but holy cow, I thought I was prepared for everything going into this read but I wasn’t. At all. I loved getting to know D, I loved understanding why he was the way that he was and I loved seeing the softer side that D didn’t understand himself with Sofia. I liked seeing him soften over the course of the book. We got different sides of D in this book and I liked it all.

Overall, this was a great addition to the series. I wasn’t prepared to like this book as much as I did but I’m glad that Kennedy surpassed my expectations. I will be sorely disappointed if Liam and Sully don’t end up together but I think Kennedy will give them the happy ending they both deserve and I’m looking forward to that. This was a good book so go and read it!