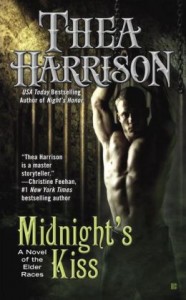 Ever since their scorching affair ended years ago, Julian, the Nightkind King, and Melisande, daughter of the Light Fae Queen, have tried to put the past behind them—and distance between them. But when a war breaks out between Julian and Justine, a powerful Vampyre of the Nightkind council, they find themselves thrown together under treacherous circumstances…

Kidnapped as leverage against Julian, Melly is convinced that her former lover won’t be rushing to her rescue. But when Julian gives himself up to save her, they both end up Justine’s captives. Armed only with their wits and their anger, Melly and Julian must work together to escape. But will they be able to ignore their complicated history, or will the fiery passion that once burned them blaze again?

Taking up right where the last book left off we have Julian, the Nightkind King, extremely pissed off that Nightkind Council member, Justine, tried to kill one of his progeny. He tries to find her and finds a massacre of epic proportions instead. He’s determined to bring Justine to heel, along with whatever council member is assisting her, so he forces a technology lockdown at Evenfall as well as declaring Martial Law. He’s in the midst of figuring out his next move when he gets a call from the Light Fae Queen stating that her daughter, Melisande, has gone missing.

Julian and Melisande had a hot, short affair twenty years earlier but as pissed off and angry as Julian has been about HOW it ended way back when he drops everything and heads to LA to assist. He still loves her even though she hurt him horribly and would do anything to keep her safe. It’s soon discovered that Justine is holding Melly and soon she’s got Julian kidnapped as well.

While Julian and Melly are captives they have to figure a way out of their predicament, kill the feral vamps that are threatening their lives and find a way to bring Justine down. On top of that the two are trying to come to terms with the fact that they love each other but need to get over what happened 20 years earlier, which they’re not sure they can do.

I’ll admit that when I found out that Midnight’s Kiss was Julian and Melly’s book I wasn’t all that thrilled to read it. I haven’t liked either of them too well in previous books and after the huge ruckus they caused in Night’s Honor I was even less inclined to read it. Holly, however, told me that I shouldn’t miss it as it ended up being really good. I normally take her advice on books so I went ahead and dug in. I’m so happy I did as I would have missed a wonderful reunion between two wonderful characters.

Julian always seemed like an arrogant ass to me and after what happened with Carling, the previous Nightkind Queen, I was disinclined to like him. This story gives us Julian’s perspective on the whole issue and I could see how he would have wanted to act in the best interests of the Nightkind. He actually had a heart and a conscience, which surprised the hell outta me! lol I loved how much he loved Melly, I must say. He would do anything, including give his life, for her and that speaks of a true hero in my book.

I realized with Melly that she was a lot stronger than I ever gave her credit for. She had been accused of cheating by Julian and she certainly stood up for herself. She kicked herself for not fighting harder for him but how could she have when Julian wasn’t willing to listen to her when she vehemently denied cheating? I felt for her but was happy that they finally worked it all out. She was also willing to literally fight for her man when it came to battle and that made me love her even more.

The biggest issue I had with this story was the fact that Julian and Melly had sex while in the dungeon. They had freed themselves from their bonds and could have gotten away. They had no idea when their captor was returning yet they took time for a little nooky instead of escaping. Why? Why does this happen? I just don’t get it. It’s so very frustrating! He was all about keeping Melly safe…yet he doesn’t even think about that. It kind of went against Julian’s personality, imho.

Despite that one major issue I had I really thought this was a good book. The characters were wonderful, the story was engaging and exciting to the point that I couldn’t put the book down once I started reading. It was definitely character driven but I liked that a lot. If you’re like me and not a fan of Julian’s go ahead and read this one anyway, I think you’ll be happy you did.