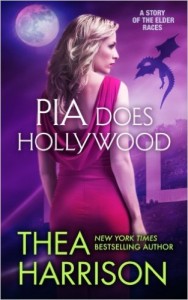 After making a diplomatic pact with humankind and the other leaders of the Elder Races, Pia Cuelebre, mate to Dragos Cuelebre, Lord of the Wyr, reluctantly heads to Hollywood to spend a week with the Light Fae Queen, Tatiana, before the busy Masque season hits New York in December.

Dragos has never let the lack of an invitation stop him from doing anything he wanted. Unwilling to let his mate make the trip without him, he travels to southern California in secret to be with her.

But when an ancient enemy launches a shattering assault against the Light Fae, Dragos and Pia must intercede. The destruction threatens to spread and strike a mortal blow against all of the magically gifted, both human and Elder Race alike.

Working with the Light Fae to neutralize the danger, Dragos and Pia find their deepest vulnerabilities challenged and their most closely held secrets threatened with exposure.

Pia Cuelebre is off to Hollywood to spend a week with the Light Fae Queen, Tatiana.  Tatiana tried to reschedule the visit but Pia and Dragos just found out that she’s pregnant and this is really the only time that will be good for her to go.

When Pia arrives (with Dragos not far behind) she immediately feels like there’s something wrong.  She settles in with Tatiana but tensions are high.  Dragos isn’t necessarily supposed to be in LA but neither him nor Pia want to be away from each other that long.  Dragos goes to buy Pia some jewelry and at the jewelry store has a bit of a weird run in with the woman in the store (which is hilarious) when she mentions something about people not coming to work and no one being in her neighborhood.  Dragos decides to investigate and finds a bunch of people who are a bit like zombies and Dragos ends up getting bitten.  From that point on Dragos, Pia, Tatiana and the Sentinels have to find a way to save Dragos’s life as well as find out who and what is behind the death of so many Light Fae.

Another wonderful novella by Thea Harrison!  I love the Elder Races novels and I love the novellas that she’s been putting out about Pia, Dragos and little Liam.  As much as I’ve loved the other books, Pia and Dragos’s romance was one that has stuck in my head the most and I love reading about them.

This story had a great blend of romance and love between Dragos and Pia but also an exciting action aspect to it…with a bit of suspense thrown in to the mix.  It was compelling and once I started reading I didn’t want to put my Kindle down.

This is story two in a three-part novella series featuring Dragos, Pia and Liam.  I’m excited and anxious to see what happens with Liam’s story next and sad that I have to wait until next month to read it!  If you want to read the novella series definitely start with Dragos Goes to Washington first as everything in book two will make much more sense. 🙂