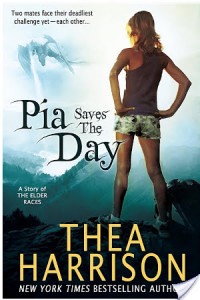 In the latest story of the Elder Races, two mates face their deadliest challenge yet—each other…

Pia and Dragos’s magical young son Liam (the Peanut), is growing at an unprecedented rate, and if that isn't enough, he is also exhibiting new, and unpredictable, magical gifts. To protect him, the concerned parents decide to move to upstate New York.

Both Dragos and Pia relish the idea of leaving behind the city. They finally have the space to indulge their Wyr side, and Liam can grow in safety. It’s a breath of fresh air—literally—but their idyllic situation is shattered when Dragos is injured in a freak accident.

Stripped of his memory and bereft of Pia’s taming influence, there’s nothing holding back Dragos’s darkest side. And in order to restore her family and save her mate, Pia must confront the most powerful menace in Elder Races history.

PIA SAVES THE DAY is part of a three-story series about Pia, Dragos, and Peanut. Each story stands alone, but fans might want to read all three: DRAGOS TAKES A HOLIDAY, PIA SAVES THE DAY, and PEANUT GOES TO SCHOOL.

Both Dragos and Pia relish the idea of leaving behind the city. They finally have the space to indulge their Wyr side, and Liam can grow in safety. It’s a breath of fresh air—literally—but their idyllic situation is shattered when Dragos is injured in a freak accident.

Stripped of his memory and bereft of Pia’s taming influence, there’s nothing holding back Dragos’s darkest side. And in order to restore her family and save her mate, Pia must confront the most powerful menace in Elder Races history.

Pia and Dragos are in their new home in upstate New York and are undertaking a building project. Unfortunately when Dragos gets too close to some blasting he is injured and loses his memory. Pia sends their son, Liam, off with the sentinels and goes after her husband. It doesn’t matter what needs to be done, she will get her husband and mate back.

This was an unexpected novella for the fact that I wasn’t expecting something so drastic and possibly fatal to befall this wonderful couple. Obviously in the Elder Races world tragedy and harm can befall them as well.

The story was a great view into the love and respect that Pia and Dragos have for each other. Pia was obviously scared that she wasn’t going to get her husband back but she was determined to go after him and do what she could. She wasn’t planning on stopping until she’d reached her goal and it showed such strength. Dragos wasn’t exactly himself so he wasn’t the kind Wyr we’ve all gotten to know and love. I thought that Harrison did a wonderful job showing us this “other” Dragos and making the story realistic. Dragos didn’t suddenly see Pia and say, “Oh yeah, there’s my mate. Gee wiz, guess I lost my memory for a moment or two.” No, uh-uh, it was much more involved than that and had me holding my breath waiting to see what would happen next.

This was a really great novella. If you love the Elder Races series then this is one you won’t want to miss. 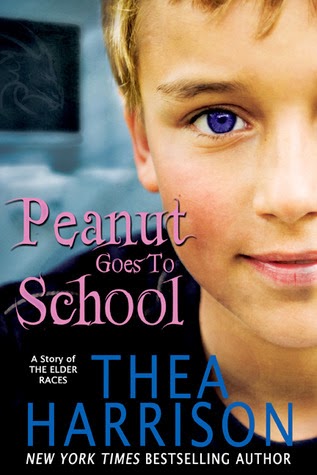 Dragos Cuelebre is no longer the only dragon.

Dragos’s son Liam Cuelebre (a.k.a. Peanut) is springing into existence, reminiscent of the first of the Elder Races who were born at the beginning of the world. At just six months of age, he has already grown to the size of a large five-year-old boy. He can read, write in complete sentences, and his math skills are off the chart.

A white dragon in his Wyr form, Liam also holds more Power than almost anyone else. In an effort to give him a taste of normality, no matter how fleeting, his parents Pia and Dragos enroll him in first grade.

They hope school will help teach Liam how to relate to others, a vital skill that will help him control his growing Power. But school has a surprising number of pitfalls, and relating to others can be a tricky business.

When a classmate is threatened, Liam must quickly learn self-control, how to rein in his instincts, and govern his temper, because there’s no doubt about it—he is fast becoming one of the most dangerous creatures in all of the Elder Races.

This book starts up very shortly after the previous book but this story focuses on Dragos and Pia’s son, Liam aka Peanut. He had been growing at an astounding rate from day one but when Dragos is hurt in the previous novella Liam has a growth spurt that’s unbelievable.

Our little Peanut has an exciting and sometimes frustrating first day of school. He makes friends, makes some enemies, protects the weak, and stands up for what he believes in. He is a great kid I just wanted to crawl into my ereader and hug the little tyke.

Hi, my name is Cuelebre, Liam Cuelebre. My code name is Double Oh Peanut, but you can call me Rock Star for short.

Such a good story! I loved reading from Liam’s POV as he has such a loving and caring personality. He loves his parents to death and that comes shining through in this story. I loved Liam’s interactions with Dragos, and the talk they had near the end was heart-warming and wonderful.

I highly recommend this story be read and enjoyed. I certainly hope we’ll get more from Peanut in the future cuz he is a Rock Star.