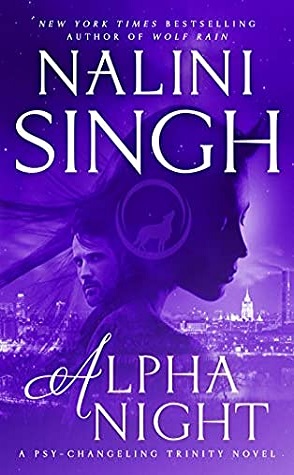 Ethan is an Arrow who had a very different childhood (if you can even call it that) than any of the other Arrows.  He believes himself to be completely unemotional so he takes a job from someone in the Consortium, just to see if he can feel something.  His job is to protect Selenka Durev, the Alpha of the BlackEdge wolf pack – the most powerful wolf pack in Russia.  Ethan is taken with Selenka from the first moment he sees her and after a bomb threat they realize they are meant for each other.

Selenka loves Ethan’s voice from the moment she hears it, but she never imagines that mating with him at first sight would ever happen.  She thought it was just something that was made up and only existed in Soap Operas.   Even though they’ve mated, they don’t even know each other.  That will come in time, but she has to find out what is wrong with Ethan.  He believes he has a mental disease and is not long for this world, but Selenka is determined to keep him alive as long as possible.

I love the Psy-Changeling series.  While I tend to give them all high marks, there are obviously some I like better than others.  This is one of those.  This takes me back to the feeling I had at the beginning of the series and I loved that.  Dealing with Psy mind issues as well as integrating a Psy and a Changeling mating was so interesting then and now.  I loved seeing Sascha Duncan again in this book and having her trying to help Ethan with his mental state.

Singh gave us romance, intrigue and mating at first sight.  Did I think it would work? Not as well as it did, that’s for sure.  I was skeptical, but Singh pulled it off.  I adored how Ethan was with Selenka from minute one.  He was hers and would do anything for her.  I loved seeing this “unemotional” man fall and fall hard.  I also loved seeing Selenka find a man that was a match for her alpha-ness. She was pretty badass and finding a man who was just as much an alpha and appreciated that trait in his woman was a thing to behold.

Overall – I loved it.  There was only one slower part (I won’t actually say slow – just slower) in the story and that’s the only reason it didn’t get 5 stars.  If you haven’t ever read the Psy-Changeling series – what are you waiting for???  Pick up Slave to Sensation now. Yes, technically this is book 4 in the Psy-Changeling Trinity series but if you haven’t read any of them then start from the beginning.  You won’t be sorry.