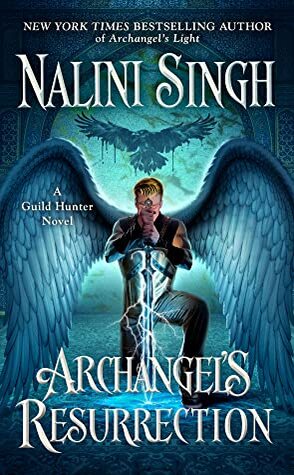 New York Times Bestselling author Nalini Singh takes us into the dangerous, haunting world of archangels…and a love that is legend.
For thousands of years, the passion between Alexander, Archangel of Persia, and Zanaya, Queen of the Nile, burned furious and bright, seemingly without end. But to be an archangel is to be bound to power violent and demanding. Driven by its primal energy, Alexander and Zanaya fought as fiercely as they loved. Locked in an endless cycle of devotion and heartbreak, it is only Zanaya’s decision to Sleep that ends their love story.
Eons later, it is the Cascade of Death that wakens them both. The passion between them a flame that yet burns, Alexander and Zanaya stand together in one last battle against the ultimate darkness. But even a warrior archangel cannot win every war. Alexander’s scream shatters the world as Zanaya falls, broken and silent…only to rise again in a miracle that may be a devastating curse. For is it truly the Queen of the Nile who has been resurrected?
Only one thing is clear: this is the last beat of their passionate, angry dance. The final song for Alexander and his Zani…

I got an eARC of this book sometime last year & read it as soon as I got it. I have to admit that I didn’t love it. When it was released, I decided to get the audiobook & try that. Justine Eyre is such an amazing narrator.

The book was good, but it’s not my favorite. I loved both Alexander & Zanaya, but I really felt like the book spanned too long of a time period. The book begins in New York during the war against Lijuan. Zanaya was woken from her Sleep by both the war & the cascade. She wasn’t ready to leave Sleep, but she knew that being awoken against her will means that the world is in serious peril.

After Zanaya is critically injured by Lijuan in the beginning of the book, Nalini takes us back to the beginning of the epic love story of Archangels Alexander & Zanaya. The book stretches from the beginning of their time together, to the middle, and ultimately to the end. I think this book really highlighted the fact that sometimes love isn’t enough. There has to be mutual respect (which there was), but it was also about being vulnerable.

There was an abundance of love between the two, but power came between them. Alexander loved power. He loved having it & amassing more of it. Zanaya knew when it was time to Sleep & didn’t forgive Alexander for not coming with her. Eventually they realized that if they both didn’t change, it was going to be the end of Alexander & Zanaya.

Overall, it was a good addition to the series, but it was far from my favorite.

One response to “Review: Archangel’s Resurrection by Nalini Singh”