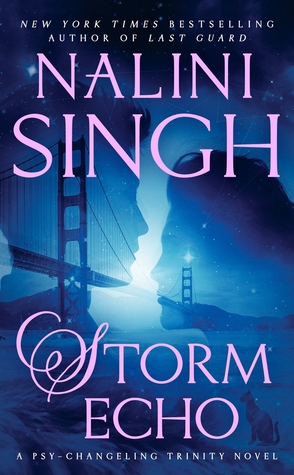 NYT bestselling author Nalini Singh takes us into the hearts of two fractured people in a world on the brink of a psychic Armageddon . . .

Silence has fallen. The Psy are free to feel emotion. Free to love. But Silence was never a prison for Ivan Mercant. The biggest threat to his future lies dormant in his brain—a psychic monster that wants only to feed. And now, the brutal leash he’s kept on that monster is slipping. He prepared for this day, for the end of Ivan Mercant . . . but that was before he met Lei.
As primal as she is human, this wild changeling brings color into his life, laughter to his soul. Then the dream shatters in a rain of blood, in silent bodies in the snow. Lei is gone. Vanished without a trace . . . until he meets strangely familiar eyes across a busy San Francisco street.
Soleil Bijoux Garcia is a healer who has lost everything. She exists in a world of desolate aloneness . . . till the day she finds herself face-to-face with a lethal stranger. The animal who is her other half knows this man, but her memories are tattered fragments. Sorrow and a need for vengeance are all that drive her. Her mission? To kill the alpha of the DarkRiver leopard pack.
But fate has other plans. Soon, a deadly soldier who believes himself a monster and a broken healer might be all that stand between life and death for the entire Psy race.

Ivan Merchant has always known he was different. Not in just his abilities, but different on a level that can’t be explained.

As a security specialist for the Merchant empire, Ivan often travels to changeling packs to continue his education. While training with a pack in Texas (??), Ivan finds himself injured in the forest. That’s when he meets Lei, a changeling healer that fascinates him. While Ivan has never been fully Silent, he abides by the backbone that is Silence. To do so would unleash something in Ivan that even he can’t control. Everything he believed in up to that point is changed when Lei walks into his life. Night after night, Lei & Ivan meet, bonding in a way that Ivan would never have expected.

After weeks of meeting & Ivan telling Lei all his secrets, they agree to meet the following day where Lei will tell him all her secrets. Except she doesn’t show up. Ivan is crushed, though he will never admit it. At that point he accepts who he is; someone that could never hold onto someone like Lei.

When a local changeling back is brutally attacked by the Psy, a twist of fate puts Ivan at the scene. Every changeling is dead except for one. Ivan’s Lei. Brutally injured, Lei is taken to the local hospital where she disappears. Ivan spends fifteen months looking for Lei, not willing to give up. Then he sees someone that looks and doesn’t look like Lei.

Soleil is in San Francisco for one reason. To kill the alpha of DarkRiver. It was Lucas Hunter that executed her pack, including her grandmother and the cubs. When Soleil realizes everything she thought she knew wasn’t true, she is crushed. Even though she soon realized that she could never hope to kill Lucas Hunter, she had a mission. Now she has nothing and no one. Until she catches an elusive scent that can only mean one thing. Not only that, she’s found a Psy that her cat knows belongs to her.

Watching Ivan fall for Lei strictly in his POV was magical. It was a slow burn and so emotional to read. When he believes that the one chance at happiness slipped away, he’s crushed. It was so moving and heartbreaking to read. When he finds her again, he’s convinced that his chance of happiness has passed. The feelings that the two have for each other are not to be denied. All Soleil has to do is convince Ivan to take a chance on her. Of course nothing is ever easy in this series & Soleil has her work cut out for her. Reading about the sacrifices these two made for each other was extraordinary. Nalini has grown so much as a writer. She has a talent that few authors match. It’s not just the individuals, it’s about Pack. It’s about family. It’s about togetherness. It’s quite literally spellbinding.