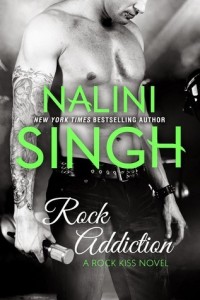 Molly’s father created a huge scandal when she was just 15 years old and her life became almost unbearable. She was laughed at and ridiculed and she barely lived through it. The last thing she wants to do is be in the spotlight. She is a librarian who stays out of the limelight and that’s the way she wants it. Then she meets Zachary Fox. She’s had a crush on him (through the media) for years and now her sister is his publicist.

While at a gathering that included Molly’s sister and Fox’s band, Schoolboy Choir, Molly enjoys watching Fox from the corner of her eye. Of course she knows that he doesn’t even know that she exists but she’s ok with that. When she’s ready to leave the party Fox ends up getting into the elevator with her and lets her know that he plans on going home with her for the night. Molly is freaked out – in a good way – and actually ends up taking him home.

Fox sees Molly and can’t get enough of her smile and her laugh. He’s almost immediately transfixed and when he decides to go home with her he’s quite happy that she agrees. After a night of passion Fox lets Molly know that he’s not ready to stop their affair. He tells Molly that he wants a month with her and then they’ll be done – Molly agrees. Of course Fox has no intention of ever letting Molly go so he needs to tread lightly.

Issues come up between the two that have to do with the media and the attention that Molly doesn’t want. The couple have many things to work through once they decide to be together but they may not be able to work it all out and be together as they want.

I really liked many things about this story. The bands members of Schoolboy Choir were awesome, as were other secondary characters in the story. They acted as wonderful supporting characters and I enjoyed getting to know more about them throughout the book.

Molly and Fox were really great together. For all of their issues I felt the love they shared with each other. They were there for each other and never gave up on the other. Yes, Molly doubted Fox at the beginning of the relationship but she learned to trust him and that made their relationship that much stronger. The best part of their relationship was their ability to communicate. I adored the fact that the two actually talked things out! So refreshing!

My issues with the story really stemmed from personal preferences. The sex scenes were NOT in short supply and they were numerous. I felt this could have been cut down to half, if not more, and the book would have still been good. For me it would have been better. I’m all for having sex scenes that further the relationship but dislike when they start to seem gratuitous.

The other issues was that at some points the book seemed to drag. I think that this was more in the first part of the book and not so much in the second part when things seemed to be a bit tighter. This also ties in with my feeling about the sex scenes so…

Anyway, I liked the book a lot and am looking forward to the next installment already. I love Singh’s Guild Hunter series as well as her Psy-Changeling series so I’m sure I’ll end up loving this one as well.

One response to “Guest Review: Rock Addiction by Nalini Singh”