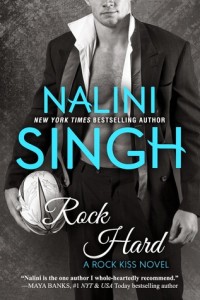 Wealthy businessman Gabriel Bishop rules the boardroom with the same determination and ruthlessness that made him a rock star on the rugby field. He knows what he wants, and he'll go after it no-holds-barred. And what he wants is Charlotte Baird. Charlotte knows she's a mouse. Emotionally scarred and painfully shy, she just wants to do her job and remain as invisible as possible. But the new CEO-a brilliant, broad-shouldered T-Rex of a man who growls and storms through the office, leaving carnage in his wake-clearly has other plans. Plans that may be equal parts business and bedroom. If Charlotte intends to survive this battle of wits and hearts, the mouse will have to learn to wrangle the T-Rex. Game on.

Charlotte has a past that Gabriel wants to know about. He’s the new CEO at the company that Charlotte works at and he’s attracted to her. Not only that, he loves her BRAIN. Gotta love a guy who loves a woman’s smarts. 🙂 He’s a hard man to work for but Charlotte holds her own eventually. She may be a mouse to start with but she’s got a mouth on her when pushed too far.

Gabriel is determined to make Charlotte his but he knows he has to move slowly due to whatever in her past made her so meek and mild.

Charlotte is a smart woman but she’s not sure that she can do the job of being the CEO’s PA but when Gabriel gives her an ultimatum – take the job or be fired – she takes the job, she’s not stupid!. She originally ends up calling Gabriel T-Rex because she feels he chews people up and spits them out but as time goes by she sees another side of Gabriel and she likes it. Add that to the lusty fantasies she’s having about the former rugby player and she’s not sure what to do with herself.

Rock Hard was a really good story. I loved almost everything about it and actually wasn’t ready for the book to end when it did. I wanted more! Not that Singh left anything out, cuz she didn’t, I just loved the relationship between Charlotte and Gabriel so much I wanted to keep reading about them.

Charlotte had been hurt by a previous boyfriend and this made her timid and shy – especially around big men, of which Gabriel was one. She loved his body but when he got serious and loud she tended to cringe. She soon learned that the best way to handle the man was with smarts and a smart mouth. He actually laughs at her at times when she talks back and I loved it. The two had such a great rapport and made me smile more and more as the story went on.

There were definitely some serious parts to this story and Charlotte’s problems with her ex were not to be taken lightly. That being said, Singh handled the situation – both the telling and the dealing with it – very well and in an adult and well thought out manner.

Rock Hard was wonderful and my recommendation is that you pick up this series and read it. I just reread book one as well and liked it even more than the first time. It’s a good series and not to be missed.

This title is available from TKA Distribution. You can buy it here or here in e-format. This book was provided by the publisher in exchange for an honest review.