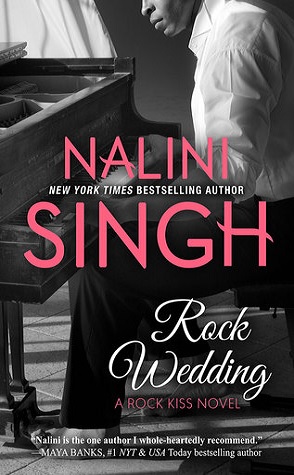 Fans of this series will remember Abe and Sara from throughout the other books. Their book starts after they got married and then divorced. If you’ve read the other books, you’ll remember that Abe is the band member with a substance abuse problem. He was a terrible husband to Sara and he ends up driving Sara away and is surprised when she files for divorce.

Abe is clean and sober and still in love with his ex-wife. She’s moved on to someone new but when that someone new hurts her, Abe puts himself back into her life. He wants to fix their broken relationship and he wants to prove to her and to himself that he’s not the same guy that she was married to. He wants to make up for all of the asshole things he did to her when they were married.

He wants his wife back.

Sarah isn’t the same woman she was when she was married to Abe and she’s glad for it. She’s learned a lot about herself and about life since she left Abe. She knows that Abe didn’t love her enough to keep her, to fight for her and she knows that she deserves better than the marriage they once had.

Sarah was a strong heroine and she overcame a lot to really turn her life around. She went from being that lost little girl who loved her husband but was stuck with him because he funded her life and she became an independent woman who supported herself and didn’t need a man to pay for anything. I did get frustrated with how long it took for her to open up to Abe again, to trust him but I understood why she was the way that she was with him. Their marriage before hurt her and she knew that her love for Abe would completely destroy her again and it wasn’t something to take lightly but I was so glad when they finally got their shit together in the end.

Nalini Singh always does a fantastic job with the romance in her books and Abe and Sarah’s romance wasn’t any different. I loved how steamy their romance was and hot they were for each other. This book was filled to the brim with sweet scenes, laugh out loud scenes and a cast of characters I have come to love so freaking much. I loved seeing everyone from the band and being there for Fox and Molly’s wedding and then David and Thea’s. I’m even more excited for more Gabriel and Charlotte in the spinoff series.

This was a great way to end a series on a high note and I’m so glad that I read it.