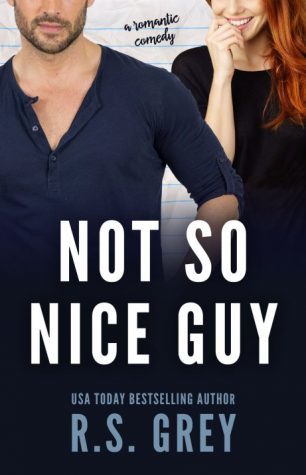 "Oh my god. Who is that?"I get asked this question a lot."Oh him?" I reply. "That's just Ian."
Just Ian is the biggest understatement of the century.Just the Mona Lisa. Just the Taj Mahal. Just Ian, with his boring ol' washboard abs and dime-a-dozen dimpled smile.
Just Ian is... just my best friend.
We're extremely close, stuck so deep inside a Jim-and-Pam-style friendzone everyone at works assumes we're a couple - that is until one day, word spreads through the teacher's lounge that he's single. Fair game. Suddenly, it's open season on Ian.
He should be reveling in all the newfound attention, but to our mutual surprise, the only attention he seems to want is mine.
He's turning our formerly innocent nightly chats into x-rated phone calls. Our playful banter sports a new, dangerous edge.
I want to assume he's playing a prank on me, just pushing my buttons like always - but when Ian lifts me onto the desk in my classroom and slides his hands up my skirt, he doesn't leave a lot of room for confusion.
I'm a little scared of things going south, of losing my best friend because I can't keep my hands to myself. So, I'm just going to back away and not return this earth-shattering kiss - oh who am I kidding?!
Goodbye Ian, ol' buddy, ol' pal!
Helloooo mister not so nice guy.

I came across Not So Nice Guy by R.S. Grey on Audible Escape and decided to give it a go. I was in the mood for something light. I enjoyed the narrators. The first part of the book was really cute.

Ian and Samantha (Sam) have been best friends for years. They work together and spend all their free time together. Although they’re attracted to one another, neither has ever acted on it because they assume the other isn’t interested.

I easily fell into the story and couldn’t wait to see what would happen when these best friends realized they wanted to be lovers. As the story progressed, things kind of went downhill. I didn’t love the author’s humor, but more, I thought both characters acted immature and silly. I didn’t get why they refused to speak to each other or why they blew so hot and cold.

Things came back around and I enjoyed the last chapter or two (until the epilogue, that is), but overall this was just a rather meh read for me. 
This is the second book I’ve read by R.S. Grey. I read another book by this author last year and did not enjoy it but I’m glad I gave her writing another try. Make Me Bad ended up being a cute read.