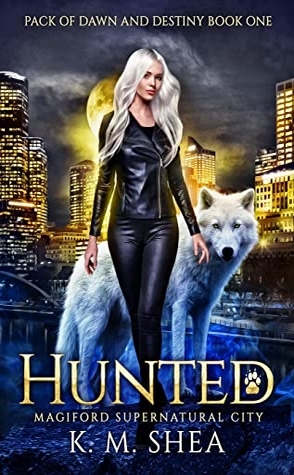 Try being a hunter living with werewolves. I’m the definition of “doesn’t fit in”. I’m not Pack, but I’m not the enemy, either.

I struggle to survive among werewolves who are stronger and faster than me, and are competitive enough to break a bone or two for the sake of “fun.”

Greyson, their alpha, is the worst of them all.

Blatantly relentless and twice as deadly, Greyson rules the Pack and expands its territory even though it’s already the largest in the region. I just wish he’d stop interfering with my life. He’s got enough trouble of his own with his incomplete mate bond, but he’s made it his hobby to tease and test me at every opportunity.

When wolves from surrounding packs start mindlessly attacking the innocent humans in our city, Timber Ridge, everything changes.

Werewolves don’t turn feral without reason. Which means someone is making this happen, and they’re targeting our Pack.

I don’t like where this is going, but how am I supposed to stop a feral wolf outbreak when I’m just one hunter? Can Greyson and I set aside our differences to see the Pack through this?

Hunted is the first book in the Pack of Dawn and Destiny urban fantasy trilogy and is part of the Magiford Supernatural City world. It features werewolves, hunters, and fae, and is filled with humor, adventure, and a sweet romance that will have you laughing in delight.

Hunted (Pack of Dawn and Destiny #1) by K.M. Shea is set in the Magiford Supernatural City universe. I’ve read a number of books by K.M. Shea. What you see is what you get. There isn’t a lot of depth or hidden meaning in these books. If you think you know who the villain is or what’s going to happen next, chances are you’re right. I understand this is what I’m getting with a K.M. Shea book and I pick them up when I’m in the mood for a light snack of a read.

Pip is a Hunter, which means she and those like her hunt werewolves who have gone feral. When she was a girl her parents were killed by friendly fire during a routine op, and the entire community of Hunters turned their backs on her. A werewolf couple took her in and she ended up on the fringes of the Pack. She isn’t Pack, but they tolerate her and often treat her like a kid sister because her particular brand of magic gives them what she refers to as “Puppy Power-Ups”. I.e., they feel really good around her and often seek her out. She can’t help feeling like an outsider, though. She lives on the outskirts of the Pack house, isn’t invited on Pack runs and in general isn’t “one of them”.

When the Pack is targeted and members start turning feral, she ends up working with Alpha Grayson to figure out what’s going on. She has a lot of sympathy for Grayson because his mate-bond is incomplete and that hurts him, but she also hates him for replacing the former alpha. Being forced to spend time with him grates on her nerves and also makes her aware of him as well as her standing as an “outsider” in the Pack. Needless to say, she has conflicting feelings about him and the way he seems to force his presence on her isn’t helping.

I really liked Pip. Her feelings of “alone-ness” among the wolves really touched me. She wanted to belong, but she knew she didn’t. It definitely tugged on the heartstrings. I liked how the Pack treated her, though. She was like a kid sister they loved snuggling with. It was cute. I was also interested in Greyson’s backstory and what the deal was there.

I did think there was a lot of repetition and filler in the book, though. It just kind of went on and on. I’m invested in Pip and seeing where things go with her, but I wish the book had been cleaned up and a lot shorter.

Pack of Dawn and Destiny