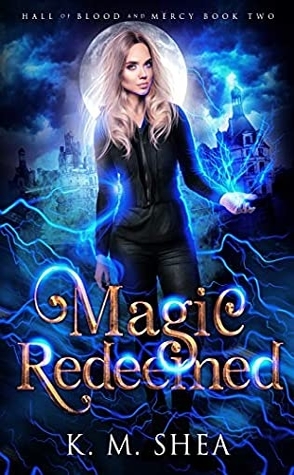 I thought life would be easier after I unsealed my magic. Spoiler: it’s not.

I want to free my family from my traitorous cousin, but with all the allies he’s got guarding his back, even my new powers won’t be enough to beat him. My best bet is to use my parents’ signet ring to prove my claim of leadership.

Things aren’t looking so good for my vampire housemates, either. As Killian Drake’s conflicts with the fae get worse, it's clear that war will break out soon if something doesn’t change.

Plus, Killian has gotten really weird about smelling me and invading my personal space. Every time he comes near my heart almost pops out of my chest, but I’m sure that’s just terror caused by being so close to the most feared vampire in the region.

At least that’s what I keep telling myself.

So, I’m a wizard searching for a ring while trying to survive living with a bunch of vampires and their deadly and suddenly touchy-feely leader. Yeah, life is definitely not easier.

Hall of Blood and Mercy is an urban fantasy trilogy featuring all your favorite vampires, wizards, fae, and werewolves. It’s packed with humor, adventure, and a sweet, slow burn romance between a vertically challenged wizard and the most lethal vampire in town.

Much has changed for Hazel since she fled her house and sought refuge with the vampires. She has regained the full use of her magic and learned to fight and protect those she loves, but she still hasn’t figured out how to take her house back. The signet ring she needs to prove her identity has gone missing, and the council won’t swear her in as head of her house without it. Her traitorous cousin is still after her and she hates that her family is suffering while she figures out what to do.

To make matters worse, Killian is having trouble with the Fae, and there’s a good chance he’s going to war. As his vassal, Hazel will have to go to war with him, which means further putting her house at risk. If that wasn’t bad enough, Killian has also been really weird around her.

There was a lot of filler in this book that felt unnecessary to me. I wish this book had been better edited. So much could have been left out. I liked the progression of the story. Hazel’s training and her determination to figure out her magic was good. I also like Killian and his vampires.