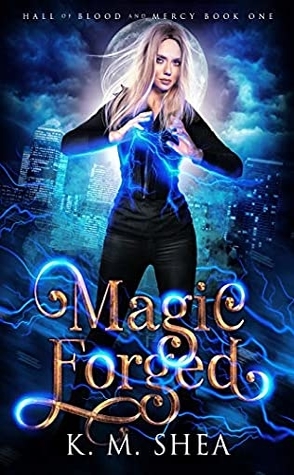 I'm one scrappy wizard. As someone with barely a flicker of magic, I've spent my life being mocked and surviving fights with bullies. But when my parents die in an accident, and I find myself responsible for our whole wizard house and family, I know my usual tactics aren't going to cut it.

The situation veers from bad to catastrophic when my backstabbing cousin stages a coup and takes my family hostage. I barely manage to flee, but the only supernatural willing to help me is Killian Drake - the most feared vampire in the region, and a far more deadly villain than the jerk threatening my family.

He's also so powerful that my flight or fight instincts kick in every time our eyes meet. And he's definitely using me as his personal magic detector in his feud against the local fae.

But Killian is also the first person to believe I might have more than just a scrap of magic. And if I can convince him to train me, I might get strong enough to free my family and get my house back.

I'm not sure what happens when a scrappy wizard is taught how to fight by a hall of deadly vampires, but I'm about to find out.

Magic Forged is the first book in the Hall of Blood and Mercy trilogy, which features vampires, wizards, fae, and werewolves. It's packed with humor, adventure, and a sweet, slow burn romance between a vertically challenged wizard and the most lethal vampire in town.

Magic Formed by K.M. Shea is the first book in the Hall of Blood and Mercy series, which is set in the world of Magiford, a Supernatural City in the Midwest. I read the Crown of Shadows trilogy last year, which is set in this world, but comes later in the timeline. I enjoyed the world enough to go back and start here.

Hazel is a member of one of the oldest Wizard Houses in the Midwest. Her parents were well-respected and loved, but she’s an outcast because she’s a magical dud. When her parents are killed in a car accident she has to become the head of the house as the only bloodline descendant. The fate of her house and her family rest solely on her shoulders. Unfortunately, members of her house don’t think she’s the best choice for the job and stage a coup. She’s forced to flee to save her life and those of the rest of her family members. She ends up the only place she knows she’ll be safe from those who would kill her or force her into marriage….with the Vampires. Killian Drake is the most feared vampire in the region. He keeps all of the other vampires in check, and there’s no way members of her family will attack him to get to her. As a vassal of his house, she’s required to serve in his household and render aid as he requests, but it’s worth it to buy some time to figure out her next steps.

Living with Killian and his vampires isn’t what she thought it would be. They train Hazel to fight and teach her to use her small amount of magic in ways she never anticipated. They also convince her that she may have more magic than she’s aware of. As Hazel tries to figure out how to save her house and navigate vampire politics, it soon becomes apparent there’s more to Killian than meets the eye…and he seems to be focused on her.

I struggled with the pacing a bit. There were times when it seems like nothing was happening and it was a chore to get through a chapter, then things would pick up and I’d read a 1/4 of the book before I realized it. Hazel’s desire to save her house was on the backburner for most of the book, which was strange to me considering that was the whole premise of the series. That aside, I did like the book. Hazel’s training was interesting to read about and I liked the mystery of Killian and what he was up to.

One response to “Review: Magic Forged by K.M. Shea”