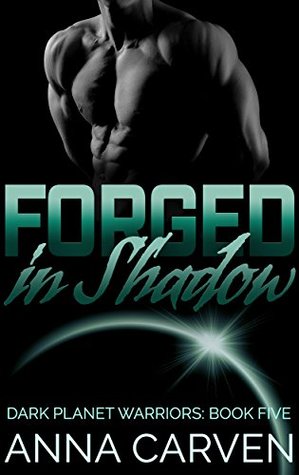 Sergeant Arin Varga has a problem on her hands. She's supposed to be in charge of a squad of peacekeepers. That's something she would normally handle with ease, except that now her people are stuck in Earth's orbit on a doomed superfreighter. To make things worse, they're being held hostage by a group of very threatening, very menacing silver-skinned Kordolians, who are insistent that all they want is safe passage to Earth to kill oversized insects. One particular alien, who goes by the name of Rykal, seems be constantly getting inside her personal space. He isn't just threatening, he's friendly and threatening, and if Arin isn't careful, that could become a major problem.

Warning: This book is a science-fiction alien romance. It contains swearing, violence, sensual sex scenes and silver aliens with fangs. It's definitely recommended for readers aged 18 and over.

Forged in Shadow is Book Five in the Dark Planet Warriors Series. It will make more sense if you've read the other books first, although that's probably not absolutely essential.

Forged in Shadow (Dark Planet Warriors #5) by Anna Carven follows Captain Arin as she leaves the asteroid mining station where she was sent as punishment. The series weaves back and forth in time and story-arc, so the storyline is kind of all over the place. I was a little annoyed at first that we went back to where the series started, since the other books had advanced so far past that, but I ended up enjoying where the story went.

Up to this point, the romances in this series have been of the insta-love variety. While that happened here on his side, she held out longer and I found it to be more believable. I really liked Arin. She’s the commander of the Peacekeepers and she’s very well suited to the position. I liked that she was the sort to just handle shit. I also liked Rykal. He was a freak even by First Division standards, which made him a total badass. There’s a lot of action and adventure here. It’s definitely an edge-of-your-seat read.

This series is cracktastic. I just can’t stop.

One response to “Review: Forged in Shadow by Anna Carven”