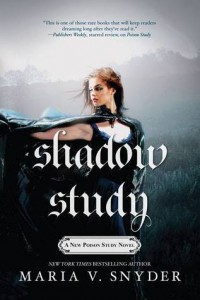 Once, only her own life hung in the balance...

Oddly enough, when Yelena was a poison taster, her life was simpler. But she'd survived to become a vital part of the balance of power between rival countries Ixia and Sitia. Now she uses her magic to keep the peace in both lands--and protect her relationship with Valek.

Suddenly, though, they are beset on all sides by those vying for power through politics and intrigue. Valek's job and his life are in danger. As Yelena tries to uncover the scope of these plots, she faces a new challenge: her magic is blocked. She must keep that a secret--or her enemies will discover just how vulnerable she really is--while searching for who or what is responsible for neutralizing her powers.

Yes, the days of tasting poisons were much simpler. And certainly not as dangerous...

Okay so I want to start this off by saying that Poison Study is my favorite book of pretty much all time. So I was nervous going into Shadow Study. What if it ruins the first books for me? What if the characters suck?

They didn’t. This book didn’t do anything but make me love Poison Study even more. Now then, on to the review.

My main impression of this book was that it was setting up for the next one. It wasn’t necessarily a bad thing, but I almost felt like there was no true climax. But the conflicts in this story are definitely fresh and new, and the character development is worth the “to be continued….” Feeling.

Also Valek’s backstory. That’s all I have to say.

I’d give this a solid 4/5 for character development and writing, with points taken for the somewhat anticlimactic ending.