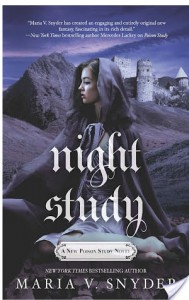 New York Times bestselling author Maria V. Snyder transports readers back to the realms of Sitia and Ixia in an exciting new Study novel full of magic, danger and intrigue.
Ever since being kidnapped from the Illiais Jungle as a child, Yelena Zaltana's life has been fraught with peril. But the recent loss of her Soulfinding abilities has endangered her more than ever before. As she desperately searches for a way to reclaim her magic, her enemies are closing in, and neither Ixia nor Sitia is safe for her anymore. Especially since the growing discord between the two countries and the possibility of a war threatens everything Yelena holds dear.
Valek is determined to protect Yelena, but he's quickly running out of options. The Commander suspects that his loyalties are divided, and he's been keeping secrets from Valek…secrets that put him, Yelena and all their friends in terrible danger. As they uncover the various layers of the Commander's mysterious plans, they realize it's far more sinister than they could have ever imagined.

So, I want to start off once again by saying that the first 3 books of the study series are my absolute favorite books. I talk about them all the time, and I could probably quote Poison Study line for line. When I heard new books were coming out, I had some mixed emotions. That constant fear that the sequel will ruin the prequel is very relevant, but once again the book held true to the tone of the first trilogy.

That isn’t to say however, that I was 100% satisfied with this book. The first 30 pages were hell, because I was convinced that this was where the sequels quit being cool. Thankfully Snyder knows what she’s doing (I hope lol) and redeemed the first chapters with the rest of the book. Even a true skeptic like myself could understand why the things that happened were necessary (and in character!)

Overall the developments with Valek and Yelena’s relationship soothed my shipper heart, and the new characters kept things good and spicy.

So I’d give this book an 4/5 for spice and intrigue, taking points off for the first 30 pages of hell.

One response to “Review: Night Study by Maria V. Snyder”