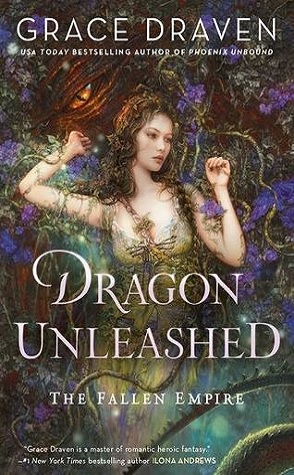 Magic is outlawed in the Krael Empire and punishable by death. Born with the gift of earth magic, the free trader Halani keeps her dangerous secret closely guarded. When her uncle buys a mysterious artifact, a piece of bone belonging to a long-dead draga, Halani knows it's far more than what it seems.

Dragas haven't been seen for more than a century, and most believe them extinct. They're wrong. Dragas still walk among the denizens of the Empire, disguised as humans. Malachus is a draga living on borrowed time. The magic that has protected him will soon turn on him--unless he finds a key part of his heritage. He has tracked it to a group of free traders, among them a grave-robbing earth witch who fascinates him as much as she frustrates him with her many secrets.

Unbeknownst to both, the Empire's twisted empress searches for a draga of her own, to capture and kill as a trophy. As Malachus the hunter becomes the hunted, Halani must risk herself and all she loves to save him from the Empire's machinations and his own lethal birthright.

Dragon Unleashed by Grace Draven is the second book in the Fallen Empire series. I really enjoyed Halani in the first book and I was anxious to learn more about her. The first couple chapters of this book were a bit slow, but I’m glad I pushed through. Once the story picked up I really fell into it.

Halani is a free-trader who keeps her magic firmly hidden. Magic was outlawed in the Krael Empire, and Halani would be put to death if her magic were to be discovered. She keeps her head down and does her best to make a living and care for her mother, who is very child-like after a head injury. When her uncle turns up with a “rare artifact”, Halani has a bad feeling he’s put them in danger, but he won’t let it go.

The world thinks Dragas are extinct, but they still exist. Malachus must find a missing piece of himself to unlock his magic before it kills him. He tracks his prize to Halani’s camp and is convinced what he seeks is nearby. He’s injured during a confrontation with the poachers who stole what was his, and he and Halani connect while she cares for his wounds.

Draven has built a wonderfully drawn world here. I enjoyed visiting different parts of the Empire and learning more about the rich history of the lands. Malachus and Halani came from different backgrounds and that reflected in their attitudes and opinions. I loved how well they balanced each other, and how neither was afraid to call the other out when needed.

I enjoyed getting to know Halani and her family better, and learning about Malachus. There isn’t a ton of action, and the pacing was slower than in the previous book. That worked well in context and allowed us to come to know Halani and Malachus better. I’m anxious for the next book in the series.