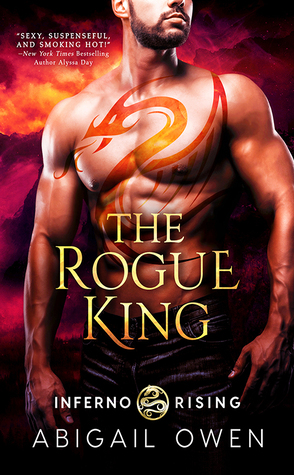 Kasia Amon is a master at hiding. Who—and what—she is makes her a mark for the entire supernatural world. Especially dragon shifters. To them, she’s treasure to be taken and claimed. A golden ticket to their highest throne. But she can’t stop bursting into flames, and there’s a sexy dragon shifter in town hunting for her...
As a rogue dragon, Brand Astarot has spent his life in the dark, shunned by his own kind, concealing his true identity. Only his dangerous reputation ensures his survival. Delivering a phoenix to the feared Blood King will bring him one step closer to the revenge he's waited centuries to take. No way is he letting the feisty beauty get away.
But when Kasia sparks a white-hot need in him that’s impossible to ignore, Brand begins to form a new plan: claim her for himself…and take back his birthright.

The Rogue King is the first book I have read by Abigail Owen. I was immediately drawn into this dragon world & just gobbled up the series.

Brand Astarot has had one objective in life. Revenge against the High King that killed his family. He is a rogue dragon with allegiance to no one except himself. As a rogue mercenary, Brand gets things for people that they couldn’t get otherwise. Now he’s on the hunt for a phoenix at the behest of the Blood King. Brand will do whatever it takes to get his revenge, even if it means turning over a phoenix. Legend says that whomever mates the phoenix is the true High King.

Kasia has been in hiding with her sisters and her mother the entire five hundred years of her existence. Her mother has been training them from the day they would have to run and now that day has arrived. While taking her last breath, Kasia’s mother sends her and her sisters away, teleporting them somewhere safe and far from each other. In all of dragon history, there has never been more than one phoenix alive at a time. Now there are four. Kasia wants to stay hidden, but she’s having trouble with the powers that her mother passed onto her in death. She goes to a local paranormal clinic for help, never believing that she would be outed. Then Brand shows up and she sees the man she’s been dreaming about for more than a year.

I really, really liked Kasia. I liked her strength and resilience. She knew that Brand planned to turn her over, but she never quite lost the hope that Brand would do the right thing. I really liked the relationship between the two. The instant connection between the two was very moving. I highly enjoyed this book and immediately picked up the second book.