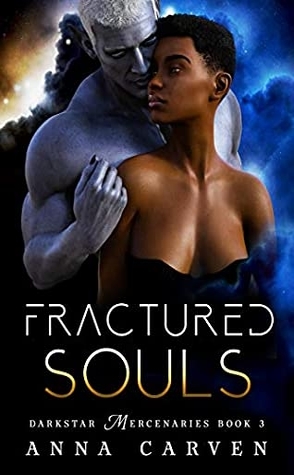 Alexis Carter is a long way from home, and she doesn't quite understand how she got here. All she knows is that she died once, and now she's alive.

She's woken into a nightmare, trapped on a dark ship full of terrifying aliens. With their silver skin and fire-colored eyes, they look a lot like the monsters that once attacked her on Earth.

One Kordolian in particular stands out... he's huge, he doesn't talk much, and his job is to guard her.
From what, exactly?

The voices inside her head?

Fractured Souls is Book 3 in the Darkstar Mercenaries series. It features a lethal silver-skinned alien hero, a human heroine, and the usual action, violence, steamy sex scenes, and HFN ("happy for now") ending. It will probably make more sense if you read Book 2 (Shattered Silence) first.

Fractured Souls (Darkstar Mercenaries #3) by Anna Carven features Nythian, one of the First-Division warriors. I was really looking forward to this after the previous book.

Alexis was killed when the ship she was traveling on was hit by some space junk, but now she’s alive. Obviously this is a confusing situation to find oneself in, and it doesn’t help that she seems to have been rescued by Kordolians. She was previously attacked and on that ship to get away from Kordolians. Oh, and there’s also the pesky matter of the being who now lives inside her head. Needless to say, she’s having a bad day. The Tharian inside of her insists they must return to her planet, but Alexis doesn’t know if it’s a trap or a plea.

Nythian has been tasked with keeping Alexis safe from herself while they figure out the best course of action. It’s a little freaky when her eyes change color and he knows he’s speaking to the being inside her. As they spend time together he realizes he needs to help her at all costs, even if that means returning to a planet he swore to never even think of again.

I really liked Nythian in the previous books and I was really glad to see him get his own story. I liked the plot of this book a lot. Alexis was a good match for him, and I thought the parts with the Tharian was well done. 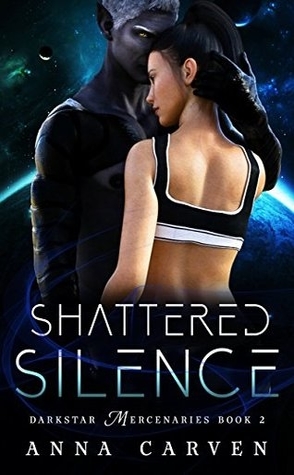 Enki Zakanin just wants peace and quiet. He's completed his mission, and on the journey back to the Kordolian Fleet Station, he'd prefer to be left alone so he can manage the literal demon inside his head.

So when a strange distress call breaks the silence, his first instinct is to ignore the signal. Why would anyone be foolish enough to broadcast an open signal in the Ninth Sector?

My name is Layla dela Cruz. I need your help.

A human? What in Kaiin's Hells is she doing this far into Sector Nine?

Now, somehow, he has to go and get her.

After all, he's given her his word.

Shattered Silence is Book 2 in the Darkstar Mercenaries series. It features a lethal silver-skinned alien hero, a human heroine, and the usual action, violence, steamy sex scenes, and HFN ("happy for now") ending.

Shatter Silence (Darkstar Mercenaries #2) by Anna Carven brings us back to the First Division Warriors as they find their place in the galaxy now that the Empire has fallen.

Celebrity Layla de la Cruz is supposed to be escaping a scandal on Earth by traveling to a new, luxury planet that was recently colonized when the ship is damaged and she ends up floating in space for several months in an escape pod. That’s where Enki finds her, just as she’s about to be taken by a group of outcast Kordolians who want to study humans.

I didn’t love the first book in this spinoff series, so I was on the fence about continuing. I’m glad I did. I really liked the premise. Enki and his struggles were very interesting and I really liked Layla and her backstory as well. These are very “fated-mate-insta-love” novels, but I knew that going in, so I didn’t let it bother me. Plus, Enki was sweet and I liked the way Layla stood with him. 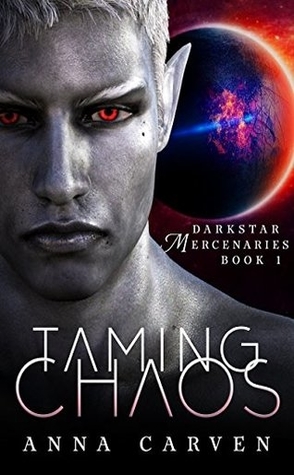 Torin Mardak came to Zarhab Groht to hunt. Some idiot's been selling Callidum weapons on the black market, and he's been tasked with finding the traitor.

The illegal trading station isn't exactly Torin's favorite place in the Nine Galaxies. It's dirty, chaotic, and full of thieves and murderers, but as an elite Kordolian First Division warrior, he's the most dangerous thing on this floating cesspit, and he won't let anything stand in his way.

But when he encounters a group of humans who really, really shouldn't be here, his priorities might just have to change, because one of them is about to get betrayed in the worst possible way...

And she just so happens to be exactly his type.

Taming Chaos (Darkstar Mercenaries #1) by Anna Carven is the first book in a series, but it is apparently a spin-off of another series by Carven. I was not aware of that when I downloaded it from Kindle Unlimited. I felt like I was missing out on a lot of information by starting here. I managed to get through the book, but I definitely feel like I need to read the first series for a lot of the backstory.

Persephone Winters is an analyst with the Federation, who is assigned to help her planet purchase plasma weapons. She and a team are on a run-down trading station to make the deal when she’s betrayed by her team and sold to the aliens instead. She sees no way out of her situation until a fierce warrior breaks into the ship she’s on and offers to protect her with his life.

As a Kardolian First Division warrior Torin is at the top of the food chain. When he sees a group of fragile humans in a place they shouldn’t be, his curiosity gets the best of him and he decides to follow them. When he sees the human woman get betrayed by her comrades, he knows he has to intervene. He has a soft spot for humans, and he knows she’s no match for the ones who have taken her.

I actually really liked Torin. He was sweet and funny, but also a total badass. I didn’t feel as much of a connection to Seph. Although the book alternates between her POV and his, I didn’t feel like I got to know her very well. I likened her to Princess Buttercup from The Princess Bride to a friend recently. Though the story revolves around her, she was basically in the background. She stood around a lot and ogled Torin, but aside from that she didn’t do much.

Still, I enjoyed Torin and the story enough to want to read more, so I plan to go back and read the original series.