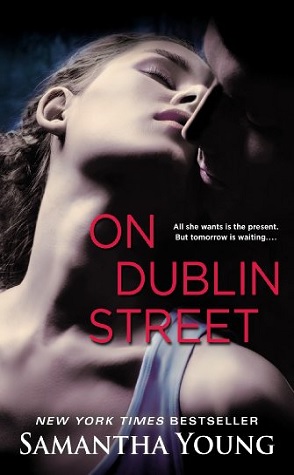 Jocelyn Butler has been hiding from her past for years. But all her secrets are about to be laid bare ...
Four years ago, Jocelyn left her tragic past behind in the States and started over in Scotland, burying her grief, ignoring her demons, and forging ahead without attachments. Her solitary life is working well - until she moves into a new apartment on Dublin Street, where she meets a man who shakes her carefully guarded world to its core.
Braden Carmichael is used to getting what he wants, and he's determined to get Jocelyn into his bed. Knowing how skittish she is about entering a relationship, Braden proposes an arrangement that will satisfy their intense attraction without any strings attached.
But after an intrigued Jocelyn accepts, she realizes that Braden won't be satisfied with just mind-blowing passion. The stubborn Scotsman is intent on truly knowing her . . . down to the very soul.

Jocelyn Butler has a rule in life. Don’t let anyone in. After a tragic accident killed her entire family when she was young, Joss has not let herself get close to anyone. Moving to her mother’s home country of Scotland, Joss tries to make a life free of attachments. It’s all going swimmingly until she meets Elodie Carmichael. She can’t pass up the roommate opportunity that Elodie has presented to her. She has no clue at the time that staying aloof from Elodie will be next to impossible. She’s too sweet to rebuff and Joss finds herself with the first friend she’s had in her adult life.

Enter Braden Carmichael. Their first meeting was electric. Each subsequent meeting is more intense until Braeden and Joss find themselves in a full-blown, balls to the wall, hot af affair. This book is told solely from Joss’s point of view. That usually bothers me, but Samantha Young has a gift that I’ve found few authors to have. Although Braden’s POV would have been a welcome addition, not having it didn’t take away from the force that was Braden.

This book was unusual insofar as it’s Joss that has the relationship hangups, not Braden. She was a little much to take at times. Her absolute refusal to let anyone close got old after awhile, especially because Braden proved again and again that he wouldn’t let her down. Until he does and it all goes to hell albeit briefly.

It’s been some time since I’ve read this book so the details are a little fuzzy. I do remember loving the book.