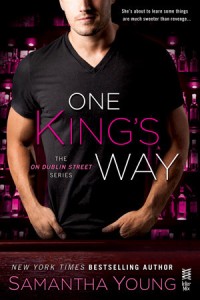 Rain is determined to get a bit of revenge on the man who once dated her sister. He humiliated her by talking her into making a sex tape and then showed it to all of his friends. Her sister took off for Australia to try and lick her wounds. The jerk, Angus, tends to hang out at Club 39 so she goes there to see him. She doesn’t really know how she’s going to bring him down but she’s going to do it.

Craig works as a bartender at Club 39 and makes good tips as he flirts and winks at all the women. He sees Rain though, as she doesn’t look like she really belongs there in her 40’s wardrobe looking like a pinup but he can’t seem to take his eyes off of her. Craig is the one-night-stand man and doesn’t do relationships but when he realizes that that’s not the type of girl that Rain is he works harder and then ends up falling for her.

Rain has high expectations of her boyfriends and so far that’s pushed them away. Craig is all of the things she wants in a man except for the flirting at the bar – this is a huge point of contention and almost breaks them up. They make up and get closer and closer but when Rain’s sister asks her to move to Australia permanently Rain has to choose between the sister she swore she’d never abandon and the man she loves.

One King’s Way is a short novella but it packed a lot of story in those pages. The story takes place after Braden and Joss have gotten together, as have Ellie and Adam, but they’re still in the dating stage of their relationship so it takes us back a bit in the overall story arc.

I really liked Craig a lot. He was a good guy who just hadn’t found the woman that would make him want to stop being a love-em and leave-em type. He knew almost instantly that Rain was different from the rest and once she let him into her life he proved to her that he was the man she wanted.

Rain was a little wishy-washy at times but others she knew exactly what she wanted. I was happy that she finally let Craig in but then she still kept him at arm’s length for a time. I loved that they finally worked out their differences and that it all ended in an HEA.

OKW was a wonderful novella that I really enjoyed reading and recommend to anyone who has been reading the On Dublin street series. If you haven’t read any books in the series you would still enjoy this one as it’s pretty self-contained and can be read as a stand-alone.