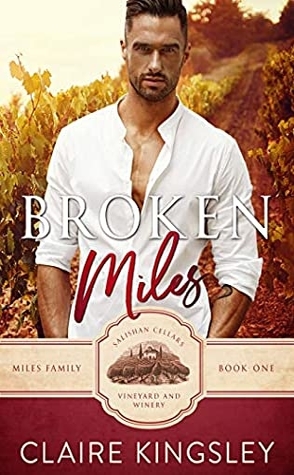 “She was unraveling me, slowly but surely. I could feel it happening. Like she was gently unbuttoning the collar of a shirt that fit too tight.”
Single-minded drive earned Roland Miles success—and cost him his first love. When his marriage to Zoe ended, he did the only thing he knew. He dove into work to put his heartbreak behind him.
Zoe Sutton’s life hasn’t exactly gone to plan. She certainly didn’t plan on losing Roland or moving home to work for his family’s winery. Four years after their divorce, she wonders if her chance at happily ever after is behind her.
After discovering his family might lose their land, Roland comes home to help sort out the mess. But between his brothers’ antics, a baby sister who’s all grown up, and a father keeping secrets, complicated isn’t even the half of it.
And then there’s Zoe.
He didn’t come home looking for a second chance with her. But the more time they spend together, the more he realizes what they lost. What they could have again.
Because the truth is, they broke each other’s hearts. And maybe they’re the only ones who can put them back together.
Author’s note: A stoic hero who’s soft on the inside. A sassy heroine who doesn’t take any sh*t. Messy family. Lots of shenanigans. Mattress burning bonfires. And a second chance at love with a big HEA.
The Miles Family series are best enjoyed in order.


Roland feels like he needs to prove himself to his father. To prove that he doesn’t need to go into the family winery business to be successful. The only thing Roland hasn’t been successful in is his marriage. Being a workaholic didn’t work for Zoe so she left San Francisco and went back home. She was lucky enough to be taken in my Roland’s family and given a job. As an event planner for the Miles’ winery, Zoe is constantly in motion. When the family finds out that the winery is in trouble, they call Roland home to fix it. As a businessman, Roland has insight that the rest of his family doesn’t have. The last thing he wants to do is return home, but he can’t leave his family hanging.

Zoe isn’t thrilled that Roland is coming home, but she’s not freaked out either. She’s moved on from Roland and their marriage. Zoe doesn’t even consider reconciliation as a possibility. She just hopes that Roland will be on his way back to San Francisco soon. Unfortunately for Zoe, Roland finds out that his dad has been running the winery into the ground. If he doesn’t do something, they will go out of business. Now the entire family has to band together to get them through the crisis that their father has put them in.

This is the second series that I have read by Claire Kingsley. She has such a gift. The characters she writes are more than loveable, they will stay with you long after you’ve finished the book(s). This was such a great start to this series. Roland and Zoe were made for each other, but sometimes that’s not enough. They had to work at it. I love the second chance trope. Another thing I love about Claire Kinglsey is that there is very little miscommunication with her characters. That is such a refreshing change for me. Miscommunication is one of my pet peeves.