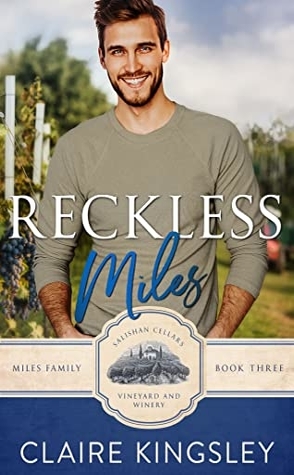 “I love being naked. Naked is awesome.” ~Cooper Miles
For Cooper Miles, life used to be an endless party. He worked hard and played harder—as often as possible. But things change—people change—and lately the party life isn’t doing it for him.
Enter Amelia Hale. Cooper doesn’t see her coming. But it isn’t every day you meet a girl in a wedding dress in a bar. A girl whose life just took a sharp left turn she wasn’t expecting.
Kissing her is totally no big deal. She’s had one hell of a day and a little kissing lesson by Cooper is bound to make her feel better. The invitation back to her hotel, however… that, he wasn’t expecting.
Saying yes to her is reckless. Not because he’s a stranger to a one-night stand. And not because she’s in a wedding dress, and the words this is my first time cross her lips.
It’s reckless because she makes him feel things he’s never felt before—big things. Nothing scares Cooper Miles. But this girl? She might be magic, and he has no idea what to do with that.
Author’s note: Cooper Miles. He’s sexy, hilarious, and deeper than you think. This former playboy has a heart as big as his personality, and when he finally falls in love, he falls HARD.
The Miles Family series is best enjoyed in order.

Cooper first meets Amelia in the local bar. She’s in a wedding dress which is the first thing Cooper notices. When they start talking, Cooper can also tell she has a good heart. He’s shocked when she propositions him with a one-night stand. Now Cooper is a good guy, but he’s not a saint. She might ask someone else and he can’t have that. So he comes up with an idea for a Coopermoon instead of the honeymoon Amelia was supposed to go on.

What starts as a one-night stand turns into something much more as the two get to know each other. Cooper is a hero that has layers. He’s funny and a little much, but his loyalty to his family is one of the best things about him. Cooper seems like such a straight-forward hero, but man, does he have layers. He will do anything to protect his family, even help his criminal father behind his family’s back. He doesn’t like hiding it, but he has to save the vineyard that is everything to him. To the family. All the while, Amelia and Cooper get closer. Amelia gets Cooper in a way that few people do. I adored them together.

This book. Holy shit. This book had everything. I loved it from start to finish. LOVED IT.