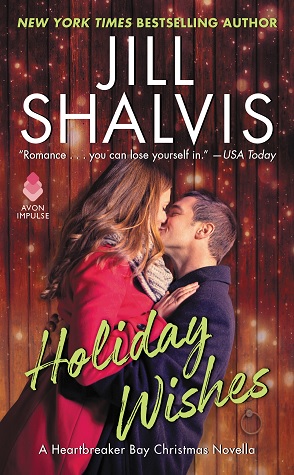 Sean O’Riley and all of his friends head to Napa Valley for a weekend of wine tasting and fun in celebration of his brother Finn, and his fiancé Pru, getting married.  When they get to the bed and breakfast that Pru insisted staying at, Sean is shocked to see Lotti behind the check-in counter.  Sean and Lotti had been friends in high school and then they’d lost their virginity together.  Lotti declared her love for Sean but then in the next breath told him she was moving.  Though Lotti attempted to stay in touch, Sean didn’t respond.

Now all these years later Sean knows that his 16-year-old self was an idiot.  He wants nothing more than to be with Lotti.  He admits that he wanted to back in high school as well but was too filled with fear to act on his feelings.  Lotti is determined to have no more relationships so turns Sean away.  Sean however is persistent and isn’t about to give up on the woman of his dreams.

Jill Shalvis always writes such sweet and charming stories.  This novella was done so well, and I found myself smiling through most of it.

Sean and Lotti were perfect together and I loved how Shalvis didn’t try to make their relationship move too fast.  The initial romance takes place within a few days but I could tell that it would be a lasting one.

The whole wedding and holiday theme of this novella wrapped up so nicely with Sean and Lotti’s story.  If you want a short Christmas romance to get you in the mood for the holidays then you need to pick this one up.

One response to “Guest Review: Holiday Wishes by Jill Shalvis”