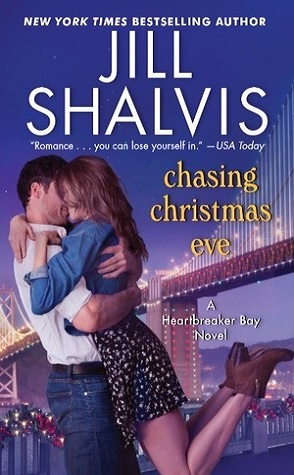 Run for the hills—temporarily. That's Colbie Albright's plan when she flees New York for San Francisco. Wrangling her crazy family by day and writing a bestselling YA fantasy series by night has taken its toll. In short, Colbie's so over it that she's under it. She's also under the waters of a historic San Francisco fountain within an hour of arrival. Fortunately, the guy who fishes Colbie out has her looking forward to Christmas among strangers. But she's pretty sure Spencer Baldwin won't be a stranger for long.

Spence's commitment to hiding from the Ghosts of Relationships Past means he doesn't have to worry about the powerful—okay, crazy hot chemistry—he's got with Colbie. Just because she can laugh at anything, especially herself... just because she's gorgeous and a great listener just because she gets Spence immediately doesn't mean he won't be able to let Colbie go. Does it?

and hope for a miracle.

Colbie Albright is a YA fantasy writer who is stressed to the max. She’s in charge of her very dependent family as well as getting texts and emails constantly from her assistant, publisher and agent.  All of this has left her with writers block and she just wants to get away and get back to the place where she can just enjoy life and not stress.  She feels sure that when this happens the words will once again flow from her.

She heads to the airport to blindly choose a destination and she ends up in San Francisco.  Her cab driver tells her about the fountain that grants love wishes and that’s where she is when Spencer is walking a dog who decides to dump Colbie into the fountain.

Spencer feels so bad about what has happened and insists on taking care of her.  He’s not sure why he feels this overwhelming need to assist her and keep her close but he just goes with the flow.  His employee, Elle, isn’t so sure about Colbie and wants to run a background check but Spence trusts Colbie and holds her off.  The longer Spencer is with Colbie the more he likes her and soon finds that he can’t do without her in his life.  Colbie starts to fall for Spence as well but she has her whole life in New York and can’t even imagine moving from there.  The two have to figure it out or give each other up for good.

This was a very sweet story.  I loved Spence and Colbie together.  It was such a natural thing for the two of them to get together and I truly enjoyed reading their love story.

Spencer is such a great character and I’ve liked him in past books.  He is a pretty simple but genius guy that has always put work first.  He never planned on getting married because he knows, especially after a past relationship failed, that he can’t put the woman in his life first.  Except, he manages to do that with Colbie and seeing Spence grow and the realization that he could put a woman first was wonderful.

Colbie at times seemed like a flighty woman but she truly wasn’t.  She was pretty organized and had taken care of her family for a very long time.  Because of this she had put herself into a situation where they depended on her fully.  She finally realized that she’d been enabling them and stood up for what she wanted – them to take care of themselves.  It worked and I loved seeing the load that lifted off of Colbie.

In the end, it was a great HEA and I was happy to see Colbie and Spence together and in love.