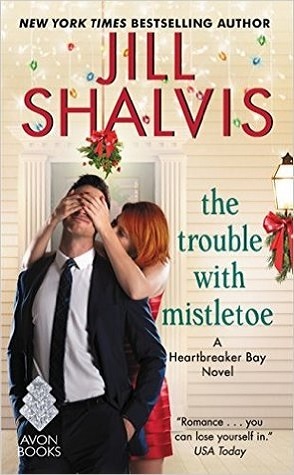 Willa Davis is wrangling puppies when Keane Winters stalks into her pet shop with frustration in his chocolate-brown eyes and a pink bedazzled cat carrier in his hand. He needs a kitty sitter, stat. But the last thing Willa needs is to rescue a guy who doesn’t even remember her . . .
He’ll get nothing but coal in his stocking.

Saddled with his great-aunt’s Feline from Hell, Keane is desperate to leave her in someone else’s capable hands. But in spite of the fact that he’s sure he’s never seen the drop-dead-gorgeous pet shop owner before, she seems to be mad at him . . .

Unless he tempers “naughty” with a special kind of nice . . .

Willa can’t deny that Keane’s changed since high school: he’s less arrogant, for one thing—but can she trust him not to break her heart again? It’s time to throw a coin in the fountain, make a Christmas wish—and let the mistletoe do its work . . .

The Trouble with Mistletoe is the second book in the Heartbreaker Bay series by Jill Shalvis. This series is reminiscent of The Lucky Harbor series and while it’s formulaic as heck, it’s still an enjoyable book.

Willa Davis owns her own business in town and she takes care of all of your pets needs. Pet Weddings? Bedazzled collars? A pet babysitter? Willa can take care of all of that for you. She’s a one stop pet shop. There isn’t a person or a pet that Willa will not take care of. If you are lucky enough to earn a spot in her life, she will welcome you with open arms and do anything in her power to make you happy and have your back.

Keane Winters is a contractor who flips houses for a living and when his long lost Aunt comes into his life and dumps her cat in his lap, Keane can do nothing but suck it up and take care of the cat. When he finds out that the cat is a little hellion, he takes her to a pet babysitter to get her out of his hair while he’s at work. He wasn’t expecting to be so attracted to the owner of the South Bark Mutt Shop but the more he takes Pita (his nickname for his Aunt’s cat, Petunia) in to board her for the day, the more attracted he becomes. There’s something going on here that he doesn’t know because the owner, Willa acts like they know each other but she won’t tell him how.

There are a few things going on during the book that kept my interest going. There are the internal issues that Willa is going through. The whole foster care life, her fear of Santa and then learning to trust Keane again after the disaster that was her last relationship. There is also Keane’s internal issues with his childhood upbringing, his strained relationship with his family (mostly his parents) then there’s Rory’s issues, the shop issues and really, the issues just keep going and going and going.

I spent some time reading this book frustrated with both Willa and Keane. The push and pull thing that Willa had going on made me want to pull her hair or punch her in the tits. I could have sworn that Pru had the same push and pull thing going on with Finn in the last book. Willa was part of the “Give your heart a break and give Finn a chance” gang so I wish she had taken her own advice and did the same with Keane. I’m going to be sorely disappointed if Elle has the same shit going on in her and Archer’s book (not that it’s going to stop me from reading the book). Keane’s issues made me want to punch a wall. I get his issues with his parents but what I didn’t get was the insecurities he had. The whole putting houses on the market and not settling down, because he wasn’t the settling down type? But he wanted to settle down with Willa? Color me confused.

Overall, the romance was good and I enjoyed seeing Keane and Willa get to know each other. They were great together and I enjoyed seeing their banter. I was glad that Willa got over the grudge she was holding over Keane quickly and that it wasn’t dragged out. There was some disappointment over the way that Willa and Keane both handled certain things but in the end, it was still an enjoyable romance that I’m sure fans of Shalvis will like.

3 responses to “Review: The Trouble with Mistletoe by Jill Shalvis”