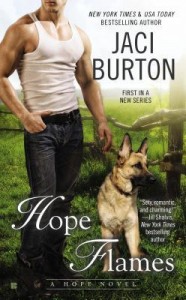 Thirty-two and finally setting up her veterinary practice in the town she once called home, Emma Burnett is on her own and loving it. Independent and driven, she’s not letting any man get in the way of her dreams. Not again.

That’s fine with Luke McCormack. Divorced and hardly lacking in female company when he needs it, he’s devoted to the only faithful companion in his life–his police dog. Still, there’s something about Emma he can’t shake.

When a series of local break-ins leaves Emma vulnerable, she seeks help from the first man to spark her desire in years. And now they’re giving each other something they thought they’d lost forever…hope.

Emma is a vet who purchased an already established veterinary clinic in her hometown of Hope. She’s excited about it as she loves animals and loves being a vet. She’d put her vet education on hold at one time due to a man and that didn’t work out at all. Because of that she’s solely focused on her clinic and not men, at all. That is until Luke McCormack walks in with his dog.

Luke is a cop in Hope and his police dog Boomer is his #1 sidekick. Luke takes one look at Emma and loves what he sees – but he can tell right off that she’s a relationship kind of woman and he’s not a relationship kind of guy. He was burned badly by his first marriage and wants nothing but mindless hookups with women.

Luke and Emma are throwing off sparks the first time they meet and they’re each attracted to the other but they decide to be just friends. They have an amazing time together – especially when the just friends turns to friends with benefits. Unfortunately a dark spot from Emma’s past shows up and has her running from Luke and not to him.

The thing I love about Burton’s books are that they are all very real. I love the feeling of normalcy she puts in her books and this one was no different. This was just a small town cop and a small town vet and it could have happened in any small town in America. I felt like I was in Hope and seeing it all first hand.

Emma had been emotionally scarred by her first boyfriend who was a controlling jerk. She had gotten away from him but she wants nothing to do with men as she can’t trust them or her own judgement when it comes to men. Luke, however, gets past her barriers and while neither of them expect to start a relationship that’s what they end up doing. Luke is hesitant because of his previous marriage and the way that turned out. I didn’t blame either of them for being leery to start anything up with anyone but it was wonderful when it did happen. They were so cute together and I loved that they became friends before anything else happened. It made their coming together that much sweeter.

This was a great fun and sexy book and one I recommend.