Hannah Daniels reads steamy romance novels to forget her last trip on the love roller coaster shredded her heart and tossed it like confetti. Her instincts about men stink, but at work they’re on point. Only her busy schedule means she reads whenever she can make time. Like at the laundromat while sitting on top of a washing machine. Don’t judge.

Firefighter Mason McNally has searched his whole life for a woman who stirs his soul. When he finds her, she’s nose-deep in a racy paperback atop a vibrating washer. Her beauty, boldness, and raw sensuality ignite his interest. But there’s a problem. He’s forgotten he’s wearing a wedding ring.

No amount of hasty explanations that it’s for his brother’s psychology experiment convinces her to give him a chance. But he’s rushed into fiery situations before, and this woman is totally worth the risk. He’ll just have to prove to her that first impressions can be wrong and their spark of attraction is oh so right.

Hannah is in the laundromat when she meets Mason.  Unfortunately Mason had been participating in an experiment for his psychologist brother and was wearing a wedding ring.  Hannah tells him off for hitting on her and even though Mason says he’s not married, she doesn’t believe him.

Hannah had been dating previously but then found out that the guy was married with a family and she was crushed by what she thought of as her own stupidity.  She doesn’t trust men in general right now and is just interested in her career.

Mason is determined to talk to Hannah once again so he basically stalks her until he can find her, but fails.  It’s through Hannah’s married sister that she ends up meeting Mason’s brother and then is re-introduced to Mason.  They find out that they are neighbors in the same building and he lives right above her.  Despite Hannah’s decisions to take things slowly they can’t seem to keep their hands off of each other.  For Hannah, however, this is just the beginning of what might be a lasting relationship.  For Mason this is the beginning of forever. He wants her and he’s not about to let her go.

This starts off as a decent story, although Mason’s stalking is a bit creepy.  Unfortunately all I ever really felt for this couple, as the book moved on, was awkwardness.  I never felt comfortable with the pair and I think it was because of Hannah.  I found her to be incredibly irritating.  She was stubborn, grated on my nerves and at times she was down-right mean to Mason.  He had his issues but overall he was a nice guy who seemed to truly care about her.  He deserved way better, imho.  Throughout the whole book Hannah never tells Mason she loves him.  Never.  I found that extremely odd in a romance.

There were some parts of the book that were better than others but I found them few and far between.  I didn’t realize as I was reading the book that I had read it before.  I think I must have blocked it, or something because only one part really made me think, “Have I read this before?”  According to Goodreads I read it 4 years ago but sadly I didn’t like it any better this time around. 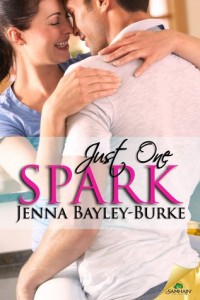 Hannah Daniels reads steamy romance novels so she can forget her lack of a personal life and the fact that the one time in her life she took a risk on love, her heart was left in pieces. Her busy schedule means she reads whenever she can make time. Like at the laundromat while sitting on top of a washing machine.

Mason McNally has waited his whole life for a woman who stirs his soul. When he finds her, she s nose-deep in a racy paperback, perched atop a vibrating washing machine. Her beauty, boldness and raw sensuality definitely stir something in Mason. But there s a problem. He s forgotten he s wearing a wedding ring.

No amount of hasty explanations that it s for his brother s psychology experiment keeps her from disappearing. Now he s consumed with finding her again and convincing her that her first impression was wrong, and their spark of attraction is oh so right.

Mason sees Hannah in the laundromat and knows immediately that she was the woman for him. Unfortunately for him he’s wearing a wedding ring because he was helping his brother with an experiment – he’s not really married. Hannah thinks that Mason is married and hitting on her and she’s disgusted – no matter how good looking she thinks he is.

A short amount of time goes by and Mason’s brother, Derek, meets Hannah at a party at her sisters house. Once Derek connects the dots and realizes that this is the woman that his brother has been trying to find he arranges to have them meet. From that moment on Mason doesn’t want to let Hannah out of his sight. Of course she has a very demanding and rewarding job which she loves but she works long hours which doesn’t let them spend a lot of time together.

Though Hannah is leery to start up with Mason she believes that they can have a sex only relationship and it will work. Mason, however, wants a lifetime and convincing Hannah of that won’t be easy.

Hannah has serious trust issues. She was dating a guy and was totally giving him her heart and was planning on getting married to him. Her sister and brother-in-law, however, didn’t like him and hired a PI to investigate him (which I have such an issue with). What they found is that her fiance was already married – with 2 kids! Hannah now believes that her judgment is completely skewed and she trusts no man to be honest with her. Though she really likes Mason she can’t give him her whole self because she just can’t trust him – or any man for that matter.

Mason is ready to settle down. He knows that Hannah is his soul mate right after meeting her and he’s not afraid to go for the gusto. It’s almost to the point of ridiculousness how he’s constantly around her and even when he hears her moving around her apartment (coincidentally he lives right above her) he immediately runs down there – almost every time. He invites himself in, is completely forward, wants to spend every minute they’re not working with her – and this is after they’ve known each other like a day. Quite frankly if a guy did that to me I’d escort him out of my house. Go stalk someone else, please. I think the author here was going for committed and sweet and it came out totally creepy.

Hannah was skiddish and distrusting, Mason was ready to marry her the first hour he met her and between the two of them I couldn’t see the good in the relationship – couldn’t see the love. I didn’t connect with either character on any level and almost stopped reading a time or two when they started to annoy me, but I kept reading. I was kind of happy they worked it out in the end but even then Hannah was hesitant to commit and sadly that just didn’t scream HEA to me.

Needless to say I wasn’t a fan of this book. I guess it was ok but I can’t say I recommend it.