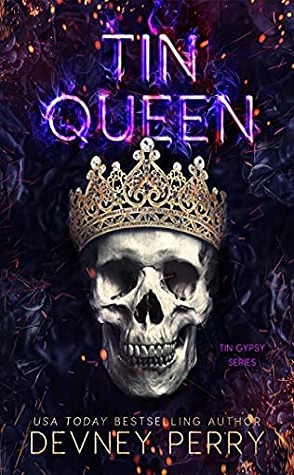 No promises. No expectations. No names. That’s what Emmett Stone agreed to with the woman who caught his eye two months ago. After years of drama following the end of his motorcycle club, a no-strings fling with a mystery woman is exactly what he needs. Except as they find themselves together more and more, it’s impossible for him to keep his feelings at bay. She’s clever and sassy. She’s gracious and kind. She loves riding on the back of his bike every Saturday afternoon and lazing in his bed every Sunday morning. She’s the perfect woman.
Except she’s Nova Talbot, the daughter of his archenemy—the man who murdered his father.
Her identity will cost her the man who’s captured her heart unless she can convince Emmett her feelings are true.
Before he learns the reason she proposed their fling in the first place.

Tin Queen is the sixth and final book in Devney Perry’s Tin Gypsy series. This book brings the Tin Gypsies full circle and they have to decide if they want to hold onto the past or look forward to the future.

The thing that Nova Talbot wants most in life is for her father to be proud of her. She has done everything he’s ever asked for her. Now she’s volunteering to avenge her brother. Her plan is easy. She’s going to get her way into Emmett Stone’s bed, then she’s going to ruin him. That doesn’t go according to plan. What Nova thought about keeping her feelings separate from her body, it all went up in smoke the night she was first in Emmett’s bed. Emmett is nothing like she thought he would be. Nova knows he is special but that is not going sway her from her plan.

Emmett has never met anyone like her. What started out as a no-names, no-talking fling ended up turning into a need that couldn’t be denied. When he wasn’t with her, he thought about her. When he was with her, he had never felt as content. Emmett knows that they still have to worry about the Warriors, the rival club they were at war with. Still, he finds himself reluctant to run plates and dig into her life. That ends up being a mistake in a big way.

Nova’s internal struggle was real and very raw. Her father had always been her hero. She’d known that he wasn’t innocent; that he killed people even. But that didn’t change her undying devotion and loyalty to him. All Nova has wanted since her brother was killed by a Tin Gypsy was revenge. She wanted to put them all in jail. She thought she could and would do anything to do so, but that changes each day as she gets to really know Emmett.

When it all hits the fan it is horrible. A nightmare. Both Emmett and Nova have to decide if it’s worth it to face to the future or if they should say goodbye. Emmett damn near broke my heart when he said this.

I truly felt the devastation coming off the pages. It was heartbreaking and it was horrible. Their love was tangible, but neither of them know if they could let go of the past; let go of the family they both lost. When they did come together in the end? It was also desperate. But it was desperation to love, desperation to hope. It was just beautiful.

I’m really happy about how this series ended. Although I would rather have an open ended Tin Gypsy series, I respect Devney Perry for knowing when it’s time to end it. That doesn’t happen much anymore these days.