Devney Perry is a relatively new to me author. She wrote the second book in the Hush Note series which was Rifts & Refrains. It was my favorite book in the series. I can’t wait to dive into the Runaway series. Clara Saint-James is completing a journey started by an old friend. She’ll return a Cadillac to California, a place she’s avoided for more than a decade. But it’s time for closure and to put old ghosts to rest. And it’s time to find out if the feelings she’s cherished for the boy from her past are just fanciful memories—or if there’s a chance they are real.

Timing was never on her side, especially when it came to Karson Avery. The two of them lived in a junkyard as runaway teens, and though she wanted more than his friendship, he always belonged to another—until that one night when he was hers.

When Clara finds Karson living in a small, coastal town, she’s not surprised the beautiful boy from her past grew into a stunning man. His smile is as captivating as ever. His eyes have the same roguish glint. But timing is still working against her.

Clara must decide how far she’s willing to go to battle for Karson’s heart. Or if it’s time to let him go and surrender to the dotted lines that have always kept them apart.

I climbed out of the car, walking on unsteady legs to his side to help him out. Then with my son’s hand in mine, I stood in the driveway and let the sun warm my face. The sound of the ocean was a gentle whisper on the air. The scent of salt and sea hit my nose.

Aria had lived on the Oregon coast for years, and though the smell was similar, there was something sweeter in the Elyria air.

Karson had always said he wanted to be close to the ocean. He’d wanted to learn how to surf. I was glad he’d gotten that wish.

The sound of a door opening caught my attention and I turned, just in time to watch a tall man with dark hair step outside. A short-trimmed beard shaded his sculpted jaw. He was wearing a pair of khaki cargo shorts slung low on his narrow hips. His green T-shirt stretched over his broad chest and clung to the strength in his biceps. His feet were bare.

This was Karson Avery, a man who stole my breath. But he’d done that at nineteen too.

Those beautiful hazel eyes studied me, then darted to the car as he came toward us. A crease formed between his eyebrows as he took it in. Then they moved to me and that crease deepened.

My stomach did a cartwheel. Please recognize me.

If he didn’t . . . I clung to August’s hand, drawing strength from his fingers. It would break my heart if Karson had forgotten me. Because in all these years, he’d never been far from my mind.

Karson’s feet stopped abruptly and his entire body froze. Then he blinked and shook his head. “Clara?”

Oh, thank God. I swallowed the lump in my throat. “Hi, Karson.”

“I can’t believe it.” He shook his head again, then his gaze shifted to August. “Hi there.”

“It’s really you.” A slow smile spread across his face, wider and wider.

It hadn’t changed. There, on the face of a man, was the smile from the boy I’d loved.

The boy I’d loved before his life had gone one direction and mine had gone the other.

And between us streaked those dotted lines. 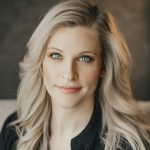 Devney is a USA Today bestselling author. Born and raised in Montana, she loves writing books set in her treasured home state. After working in the technology industry for nearly a decade, she abandoned conference calls and project schedules to enjoy a slower pace at home with her husband and two sons. Writing one book, let alone many, was not something she ever expected to do. But now that she’s discovered her true passion for writing romance, she has no plans to ever stop. Devney loves hearing from readers!

One response to “Sunday Spotlight: Dotted Lines by Devney Perry”