Summer nights and star-crossed lovers! From USA Today bestselling author Sarina Bowen.
Once upon a time, he gave me a summer of friendship, followed by one perfect night. We shared a lot during our short time together. But he skipped a few crucial details.
I didn’t know he was a rock star.
I didn’t know his real name.
Neither of us knew I’d get pregnant.
And I sure never expected to see him again.
Five years later, his tour bus pulls up in Nest Lake, Maine. My little world is about to be shattered by loud music and the pounding of my own foolish heart.

The water lapped gently under the dock. If I turned around, he might not truly be standing there. I held my breath.
That’s when he began to whistle softly. The first four bars of “You Are My Sunshine.”
Goosebumps rose on my arms.
“You remember,” I gasped, whirling around. Five years later, and he still knew to warn me. He hadn’t forgotten that I used to startle if he—or anyone else—approached me from behind.
He walked towards me slowly, his hands spread wide, muscular arms on display. His hair was shorter now, but still the most beautiful shade of sandy blond. “Of course I remember, sweetness. Never sneak up on Kira.”
At that, my eyes filled with tears.
“Hey, now,” he said gently. He’d made it all the way out on the dock, so close I could almost touch him. His blue-green eyes regarded me warmly. “I’m sorry to take you by surprise. Don’t I get a hug?”
Lord, I needed to get a grip. I took a step towards him, and he folded me in. He smelled the same, like sunshine and soap.
It hurt so much to see him again. It was excruciating to be wrapped in his hug.
“God, I’ve missed you,” he said.
And I had absolutely no reply to that. My heart urged me to hold on tightly and never let go. To confess that I thought of him every single day.
But I didn’t do it. Because I was still so angry, too.
Drawing off that anger, I summoned a little willpower, stepping backward, freeing myself. “If I ask how you’ve been, which name should I use? Jonas or John?”
A look of dismay creased his handsome face, his eyes closing for a moment, before opening again to pin me with a turquoise gaze. “Kira, I’m so sorry about that. That summer I was just trying to get away from it all.”
I swallowed. “Really? But I told you all my secrets. You must have thought that was pretty funny.”
He blinked, his face as stunned as if I’d slapped him. “Jesus, Kira. Never.”
That wasn’t the reaction I’d been expecting. And it was suddenly very hard to hold his gaze. I’d spent the last few years shaping my idea of him to match the pictures I saw in Us Weekly. The problem was that the guy standing in front of me on the dock did not look like the frivolous celebrity in those articles. This was the same man I’d met all those years ago. His face was open and youthful, his voice rich and mellow. His gaze seemed to touch me everywhere at once, making me feel flushed and confused.
He stepped forward again and wrapped his arms around me. And I let him. I took a deep breath of him, and my heart began to gallop again. When I put my arms around his back, I felt his lips press against my hairline. It was a chaste kiss between old friends.
Or rather, it should have been. But the feel of his lips on my skin sent a charge through my body. Tipping my face to meet his wasn’t even a conscious act. It was more like the inevitable result of a five-year absence and Earth’s gravitational pull.
When I moved my chin, his lips slid softly down my cheekbone. Still, it might have ended there. He might have released me, but he didn’t. “Sweetness,” he whispered.
And then? His kiss slid to the corner of my mouth, pausing there, hovering. Torturing us both.
I couldn’t resist. I leaned forward an immeasurably small distance. At that, he made a low sound in the back of his throat. He melded his mouth onto mine, his hands curving around my lower back. With a sigh, he teased my lips apart until his warm tongue met mine.
The next moments were lost to me. I melted against his body, knowing nothing except the stroke of his tongue against my own and the feel of his breath against my face. His strong arms held me in their grasp. It was the sound of my own gasp that finally brought me back down to earth. And I became aware that someone was standing on the little beach nearby, watching us.
“Oh my God, your…” Horror stopped me from finishing the sentence.
He looked over his shoulder without releasing me from his grasp. “My drummer,” he said quickly. “We’re old friends.”
I pushed on his chest until he took a step backwards. I was hot and confused. I needed oxygen and time to think. “Look… we need to talk.” I couldn’t tell him my secret now. Not with an audience. And not without a little rehearsal. “Tomorrow,” I added.
“Okay,” he said, his voice low and even. “I’d like that.”
“Um, lunch?” I asked, my eyes on my shoes. I couldn’t quite catch my breath. There wasn’t enough oxygen in the atmosphere anymore. There might never be again. 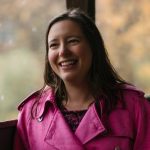 Sarina Bowen is the RITA® Award winning author of over two dozen contemporary and LGTB romance novels. She most recently hit the USA Today bestseller's list in February, with Brooklynaire. Formerly a derivatives trader on Wall Street, Sarina holds a BA in economics from Yale University.

Sarina's books are published in a dozen languages on four continents. In 2016, The Romance Writers of America honored HIM by Sarina Bowen & Elle Kennedy with a RITA award for Best Contemporary Romance, Mid-Length.

6 responses to “Sunday Spotlight: Lies and Lullabies by Sarina Bowen”